A precedent has undoubtedly been set in the automotive industry to create innovative PR stunts, with many brands competing for attention to stand out from the crowd.

Here’s a look at some of our favourite car PR moments over time:

Old but gold – In 2008 the appearance of ‘faceless’ people in the crowd at Wimbledon, Henley and Elton John’s white tie and tiara ball caused wild speculation on social media, blogs and news coverage as to their identity. After creating sufficient mystery, this was revealed as a viral advertising campaign to drum up interest in its new Lotus Eagle car.

With a tight budget, Lotus favoured a campaign that would create generate free advertising through editorial coverage and developed a truly memorable campaign around the world, centred on their slogan “true character in a faceless world”.

In 2014 Lamborghini donated a specially made edition of one of its latest Huracan LP 610-4 sports cars to the Italian State Police – that’s certainly one way of guaranteeing world-wide brand attention. The company even trained the police on how to drive this super-car.

From one makeover to another… 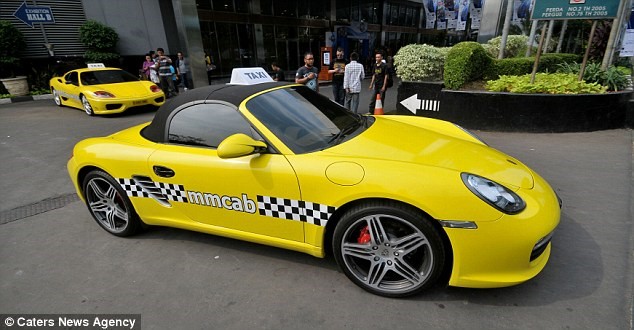 A taxi-firm for the super-rich in Indonesia turned out to be an elaborate PR stunt, staged by Indonesia’s biggest bank, Mandiri. The taxi-firm had claimed to be catering for the rising number of people in the Indonesian capital, Jakarta, craving a luxury lifestyle.

With the rise of social media, one sure fire way of gaining attention in the PR world is capturing a social presence, and these flashy cabs led many excited Jakartans to the “MM Cabs” Twitter page looking to book themselves a ride. It was here that these social media followers were led to the Mandiri’s website, promoting the new mobile banking app.

No piece of cake:

Granted, this one is more of a TV ad than a PR stunt, but I could not leave it off a top-20 short-list of automotive marketing campaigns. Skoda created a life-size Fabia, out of cake, to continue to change people’s perceptions of the brand.

An enormous amount of trouble to go to for an advert, some estimating that it cost £500,000 to make. It captured the imagination of the public, reaching over 800,000 views on Youtube, also gaining wide coverage in the national press.

There’s only one thing better than paying for a successful advertisement… free press!

“Hope she was worth it”:

The eye-catching nature of this mystery car, parked outside Harrods, created a massive social media success. A stunt that proves everyone loves a bit of gossip!

Crowds gathered, and shocked on-lookers took photos of the graffiti-covered car parked outside Harrods, posting them on Twitter and exciting the interest of the national press.

It was later revealed in a Youtube rival that this was part of a PR stunt to promote the new Revere Knightsbridge bodykit for the Range Rover Vogue.

From one mystery to another:

In 1993, there was a media frenzy over this strange crop circle, found in Johannesburg. 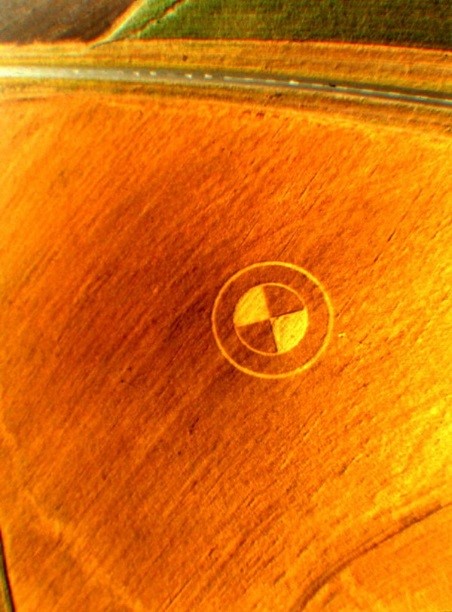 There was much media speculation in South Africa, over whether this may have been the work of a UFO. Global curiosity was generated by newspapers, as well as TV and radio shows, until the ‘minor’ missing detail was pointed out – that the circle actually formed a BMW logo.

Once BMW had cleaned up, what Hunt Lascaris estimated as over $1 million worth of free publicity, they aired a TV advert showing aerial views of this mystery circle, accompanied by the witty tag-line “perhaps there is intelligent life out there after all” – very clever!

One of our own – we worked with Fiat to launch their new pink Fiat 500. 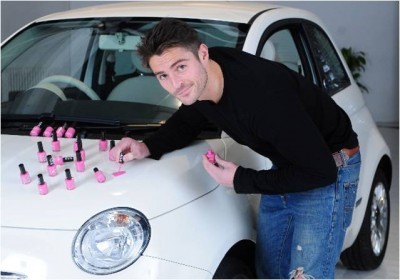 Over the course of three days our artist would painstakingly transform a white car to a pink work of art using 200 pots of pink nail varnish, streamed live and delivering the world’s longest online advert.

Thousands of internet fans tuned in to watch the attempt following coverage in key online sites including Daily Mail, The Sun, Daily Telegraph, Heat and What Car.

After all the viral videos, speculation and social media hype, it turns out that the hover-board of our ‘back to the future’ dreams, will remain a dream.

The Lexus hover-board is not a hoax, but only works on magnetised copper surfaces, and is not a commercial product – just a very clever PR stunt.

This taste of the future unsurprisingly gained international news coverage, and though later revealed to be part of a PR stunt to elevate the Lexus brand image, continued to gain interest from journalists who were invited to try out the prototype.

This is one of my favourite car campaigns I have come across, because it is so simple and cheap, yet so effective. Utilising the power of the internet to create free press, Jeep put car parking spaces in areas normally considered to be no-parking zones, to underline the vehicles durability. 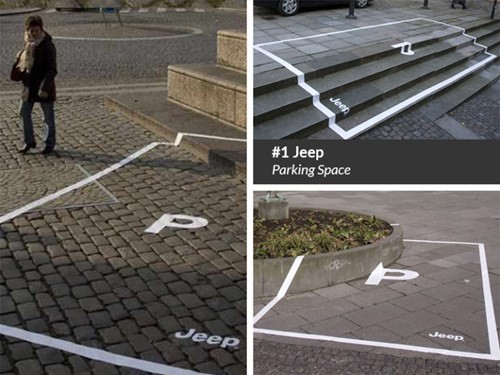 Though this stunt was short-lived, for only a few weeks in 2008, the thought put into this campaign won its place on this top-twenty shortlist.

When Škoda tasked us with creating a brand activation campaign to raise awareness for their new ‘Citigo’, a car designed for city driving, we jumped at the opportunity for a new headline-grabbing stunt. 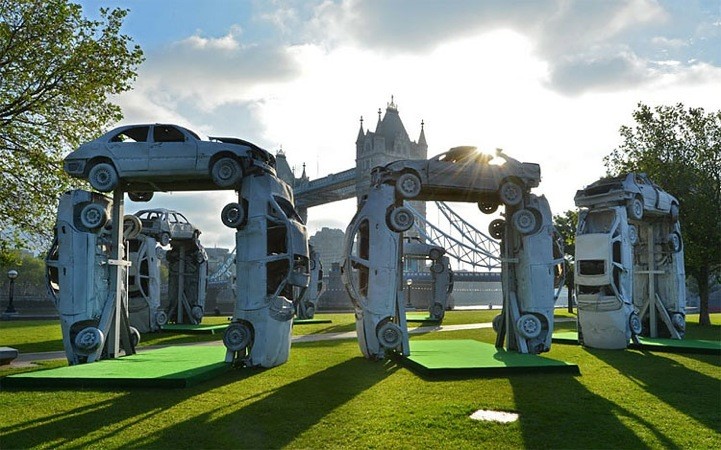 A 30-tonne structure of Škoda scrap cars in the style of Stonehenge was erected, overseen by artist Tommy Gun, creating a visual masterpiece right in the centre of London – the kind that simply could not be missed.

It seems that the sky really is the limit when it comes to car companies attempts to raise their profile.

Live on TV, Honda spelled out their logo in the sky with a team of freefalling skydivers.

How to get people talking? Well a world first certainly helps!

When it comes to PR stunts, it often seems that the bigger the better – creating something that just cannot be ignored.

If a brand can create an imposing presence, then they can’t help but grab attention. Toyota took note of this, when they created the tallest climbing wall ever built in New York City on a billboard to promote the RAV4. 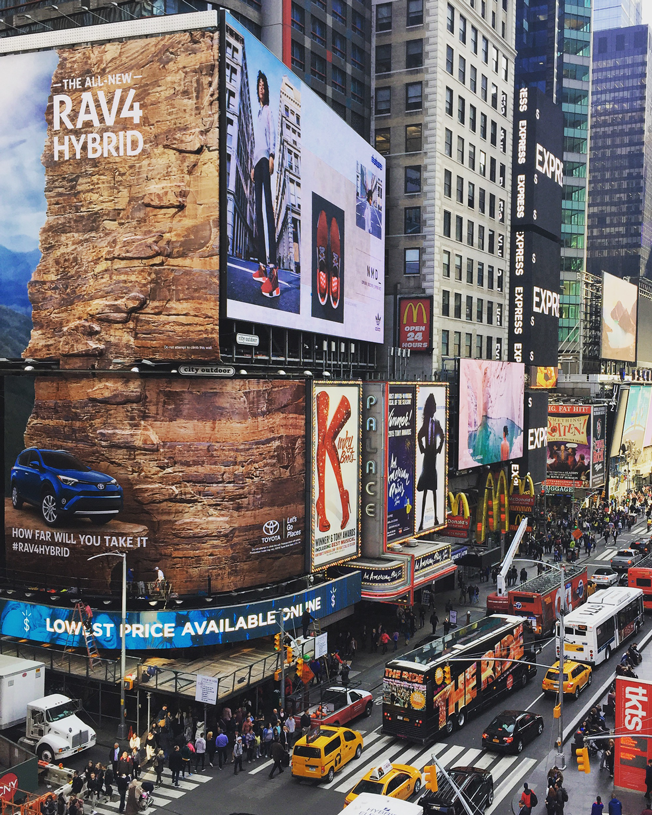 At the centre of Times Square this got a lot of visibility!

To promote their new intelligent parking assist technology, Nissan have created futuristic furniture, which repositions furniture at the clap of a hand, to leave an office floor tidy.

Just like with the Lexus campaign, it seems that there is nothing like a bit of futuristic technology to get people talking!

This stunt was a move by Kia to create a more approachable brand image and it seems like a genius way for them to create themselves a loyal audience. This fully interactive brand experience staged by Kia at Westfield shopping centre included a ‘dream chute slide’, a grooming and makeover station, a fitness area using an Xbox games console, and a car racing game zone. 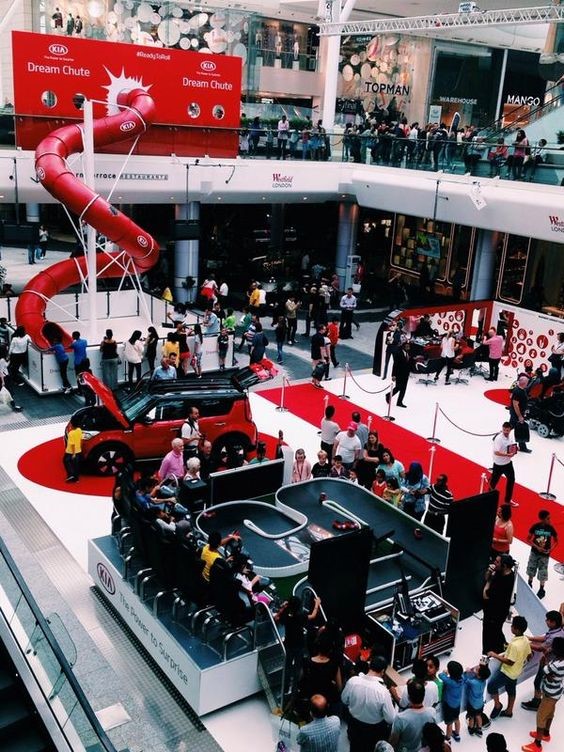 The marketing director at Kia wanted to show off a “young, vibrant and fun brand,” and what better way to do this than replacing the stairs with a slide!

In an attempt to drum up interest in test driving the Porsche 911 Carrera S, Porsche drove the car around an affluent neighbourhood and took pictures of it driving off homeowners’ drives.

They printed the photos and mailed them in the format of an advertisement to the home owners. This stunt had a 32% response way, way over the average 2% response that direct mail usually receives, creating a new definition of ‘direct’ mail! 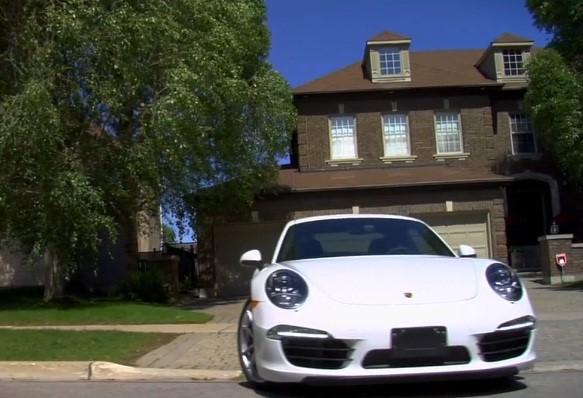 An absolutely ingenious way of creating an individualised advertising campaign that directly targeted an audience that could actually afford to splash the cash on such a luxury!

The campaign follows a young woman called Marie, who finds herself trapped in her C 63 AMBG Coupé in Streetview. The ad, which first launched on Youtube, and then aired on TV during the X Factor, urges consumers to help ‘free’ Marie by working out a series of clues given on the website, for a chance to win a C-Class Coupé.

This advert was forward thinking in encouraging interaction on social media with the hashtag #escapethemap, understanding that there is a new generation of people who watch TV, whilst at the same time browsing on phones, iPads and laptops.

Everyone hates a pot-hole:

This one, admittedly is not actually advertising a car, but the scale of the stunt grabbed my attention here!

This stunt was used to create a buzz around a new iPhone app to help people deal with what is commonly known a ‘pot-hole season’ (known by others as Spring) in Montreal. 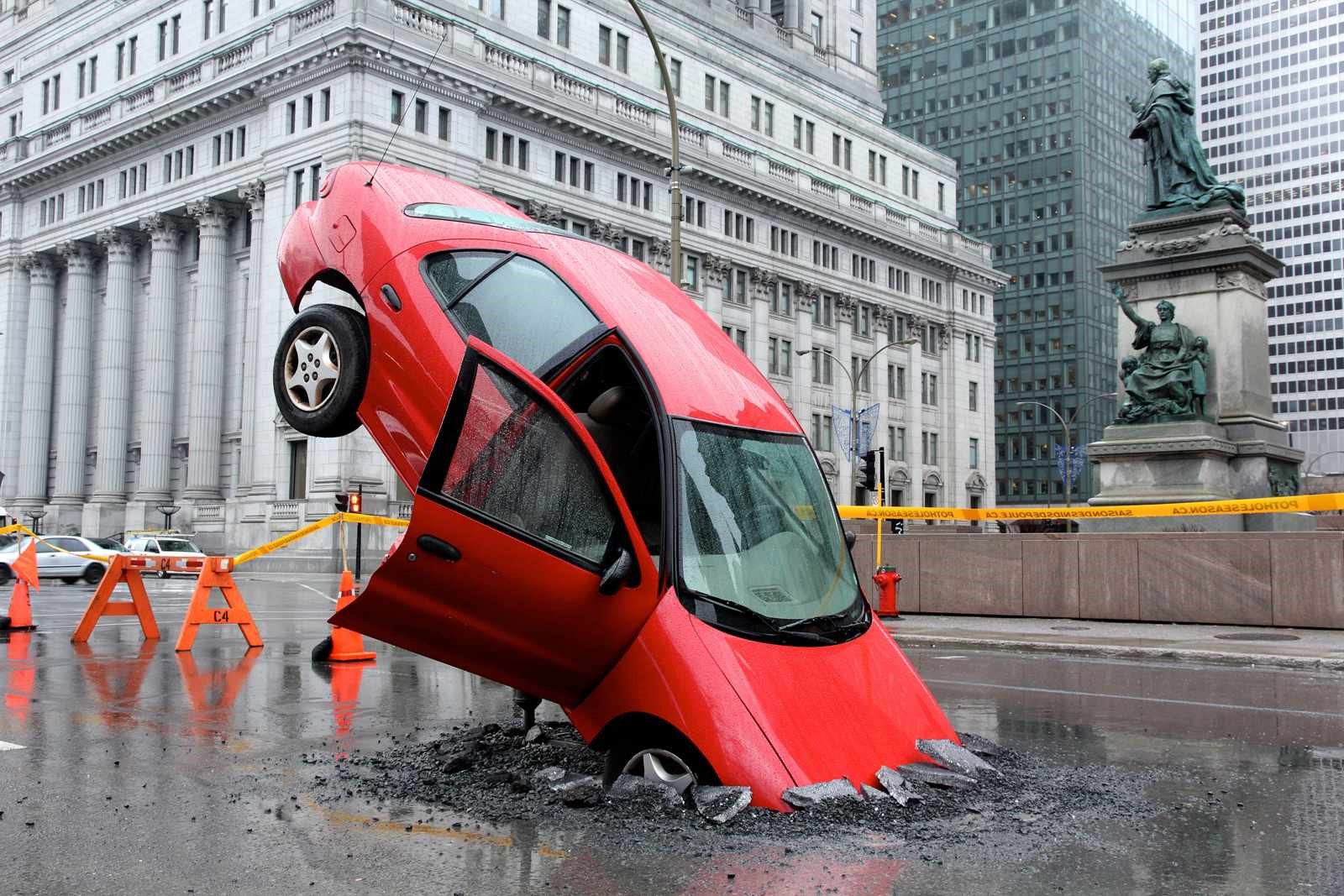 They launched their new app, which is used to track and share the location of potholes, with this high visibility stunt followed by a print ad campaign demonstrating lipstick smears and coffee mishaps experienced by un-lucky drivers on a website that reported the mapped pot-holes.

The number of Youtube views is often seen to be the mark of a successful campaign for a brand, a nervous wait to see if it gains an explosion of popularity, but the not-so-well-kept secret is that some brands ‘manufacture’ Youtube views. Renault mocked these “views” by launching a campaign tracking “legitimate views”.

The ad tells us that the new Renault Megane can recognise and count the “real views” of heads turning, at the undeniably attractive car. A thoughtful stunt that gained much attention on social platforms.

“Why is there a helicopter dangling a car over London” – Twitter

Jaguar air-lifted a car over London to precede their launch of the company’s ‘baby’ XE sports saloon car at Earls Court. This strange stunt led Londoner’s to take to Twitter for answers! 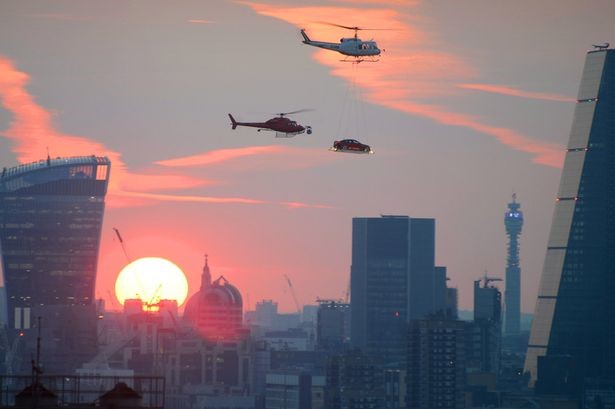 The internet is the perfect platform for a brand to gain world-wide attention, especially if they create a buzz on social media.

Chevrolet, a popular brand in America, sometimes have trouble cultivating global attention, but they put the power of the Internet to the test, when they hired action sport legend Rob Dyrdek to make a modified Chevrolet Sonic flip in mid-air. The video of this success went viral, allowing Chevrolet to start their expansion of appeal to a millennial audience in 2012.

Who you gonna call?

#WeAreHere: 'Soldiers' across the country gather to pay respect