It marks the launch of the theme park’s annual ‘Fright Nights’ season starting on 29th September, which will be biggest in its history, running for more days than ever before.

The living billboard, which soaked unaware passing commuters in blood and guts this morning in London, was created using over 50 kilogrammes of offal and blood. 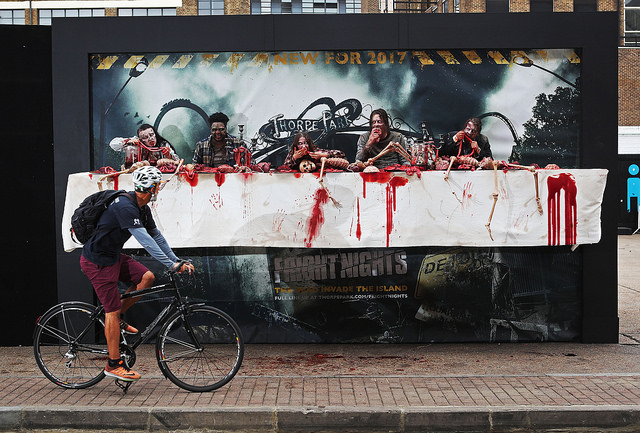 Thorpe Park in Surrey has secured an exclusive deal with the U.S. television network AMC to launch two new live-action attractions based on the globally renowned TV series The Walking Dead.

The mazes coincide with the premiere of The Walking Dead Season 8 on 23rd October at 9pm on FOX and the landmark 100th episode. 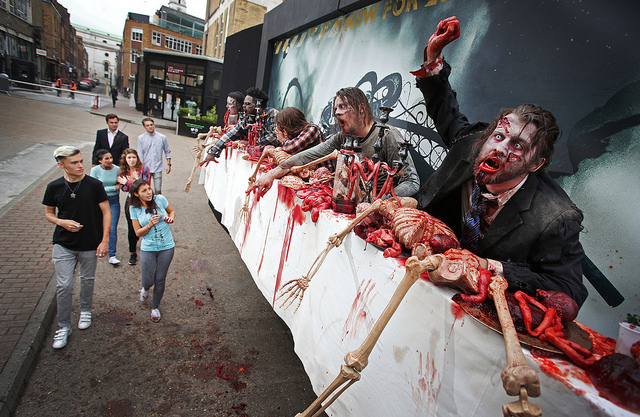 The indoor maze called The Walking Dead: Living Nightmare will see visitors experience terrifying iconic scenes of the global phenomenon, including the world’s first live attraction featuring of season 7. They will join other survivors on the brink of death at the mercy of the notorious Negan.

In The Walking Dead: Sanctum, guests will experience a live-action outdoor maze like no other. Following in the footsteps of survivors, they have to navigate their way past the roaming walkers or risk being captured. 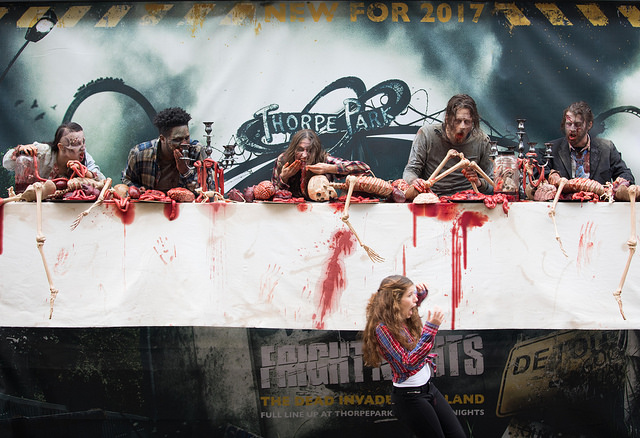 Marketing executives at Thorpe Park Resort are trialling the new interactive gore-fest billboard in East London, with a view to rolling out the new advertising format nationwide in September and October. Mounted on a truck, it will be touring London to promote Fright Nights this autumn.

Local resident Louis Hogan tweeted: “Woke up to a shocking sight this morning. Cheers @THORPEPARK – breakfast straight down the toilet!”

Dominic Jones, Divisional Director, at Thorpe Park Resort said, “Fright Nights is THORPE PARK Resort’s biggest event of the year, and we’re hugely excited to bring the worldwide phenomenon that is The Walking Dead to our visitors. Each of the two specially built mazes are absolutely terrifying and are definitely not for the faint hearted.”

As part of the advertising campaign, the zombies also took to the street armed with sandwich boards and golf sale signs to promote the two new attractions sending hipsters into a frenzy.