Europe’s leading airline easyJet have announced a new route to the ‘land of nod’ with the release of ‘Jet Sounds’; a ground-breaking charity single and album comprised entirely of engine noise.

Sleep Council research reveals that 22% of Brits sleep poorly most nights but experts believe that listening to ‘white noise’ could have sleep-inducing effects. 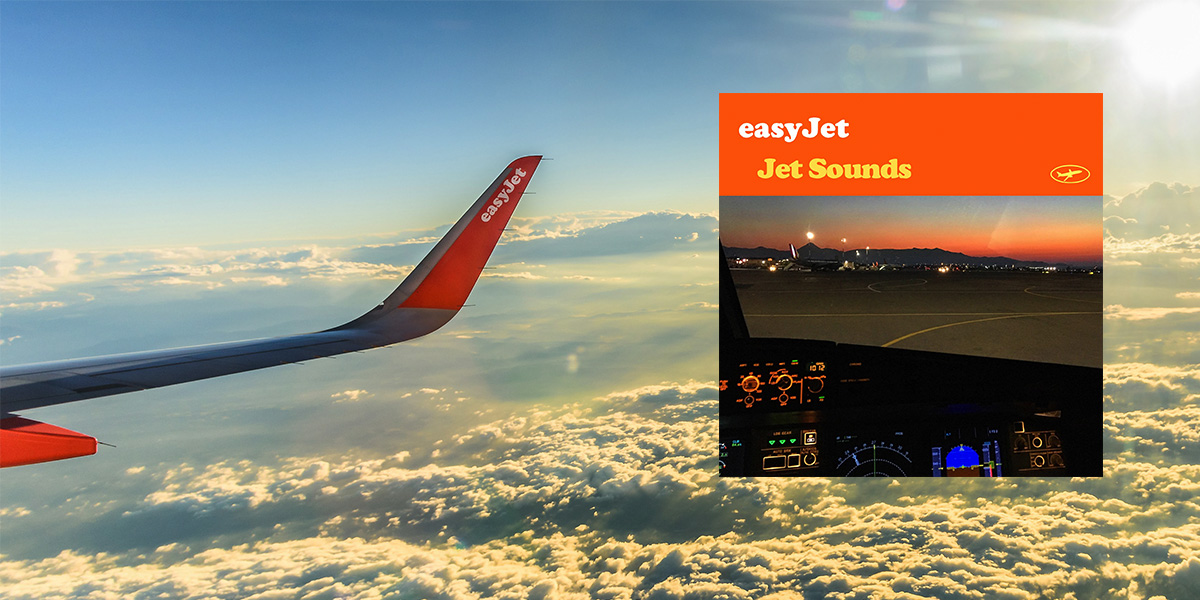 The single and extended cut album was recorded at 39,000ft en-route from Gatwick to Nice and features the sublime harmonics of a pair of CFM56, twin spool, high bypass, turbo fan engines.

The album and single will be released on Friday 11th August.

Destined to find a place in the pop canon as the spiritual, if slightly more airborne successor to Brian Eno’s Music For Airports, the sublime harmonics of ‘Jet Sounds’ will surely also earn the release an unallocated seat alongside John Cage’s seminal 4’33” and The KLF’s legendary post-rave masterpiece Chill Out.

There is also a 10-hour video…

Research confirms that white noise can help to send people to sleep. Recent reports explain that white noise allows the brain to block out sleep interruptions by displacing background noise and loud interruptive peaking sounds such as traffic, snoring and barking dogs.

Recordings of white noise have also been used to calm babies, aid studying and even help overcome writer’s block.

Sleep expert Dr Sandra L Wheatley, who has consulted on production said “The soft, repetitive, ambient drone of white noise can drown out sounds, gently settle the brain and aid the on-set of sleep. There is also strong evidence that it can dampen out disruptive noises that can disturb our slumber. The low throb of a powerful jet engine is ideal for this. easyJet have captured the perfect tones for the release.”

It is a competitive week in the music charts with easyJet facing rivalry from chart-topping popstar Pink, indie band Bastille and American rockers Fall Out Boy.

Tina Milton, Head of Cabin Crew from easyJet said “Since the introduction of the NEO with its quieter cabin, we’ve created a more relaxed environment for our customers. We thought we would share this experience and help our customers get a good night’s rest in their own home, whilst helping to raise money to support The Children’s Sleep Charity. Who knows we might even become the first airline to hit the UK top 40 single and album charts.”

Vicki Dawson, Founder and CEO of The Children’s Sleep Charity said “This is a fantastic, fun idea from easyJet as we know repetitive, consistent white noise can help some people who suffer from disturbed sleep get a better night’s rest – the gentle humming of a jet engine can help to support some children and families to get a better night’s sleep. We’re delighted that easyJet are donating the proceeds from the sale of the single and album to our charity, these funds will help us to further support children and families with sleep issues and provide accredited training for professionals.”

White Noise Machines can cost up to £40 to purchase however ‘Jet Sounds by easyJet ‘is available to download as a single for just 0.79p and an album which features an extended cut for £7.99 from iTunes [LINK], Amazon [LINK] and Google Play [LINK] – with all proceeds donated to The Children’s Sleep Charity [LINK]. There will also be limited edition vinyl prints available exclusively via easyJet’s Facebook page [LINK].