The future of Britain? floating cities and high-rise farms.

The next 100 years will see the architectural landscape change beyond all recognition according to new research released today. Super-deep basements, floating cities and easy space travel all feature in the top 10 of predictions about the future of architecture and engineering. 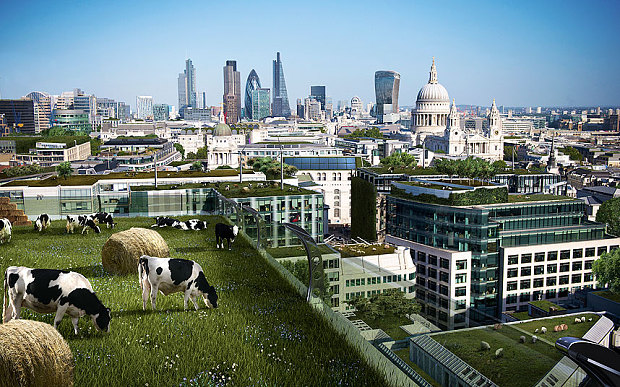 The research, which was carried out to mark the launch of new series Impossible Engineering which premieres on TV channel Yesterday at 9pm Tuesday 26 March, asked a panel of four acclaimed experts to provide a long list of architectural and engineering developments they predict we will witness within the next 100 years. The panel included Dr Rhys Morgan, Director of Engineering and Education at the Royal Academy of Engineering; award-winning architects and lecturers at the University of Westminster, Arthur Mamou-Mani and Toby Burgess; and urbanist, Linda Aitken. 2000 British adults were then asked to choose the predictions they thought most likely to happen, and which they would most like to see.

Topping the poll was super deep basements. The idea of multi-layered basement extensions is already beginning to materialise, particularly in high-value, densely-populated areas of London, and future homes look likely to have as many floors below ground as they do above.

Floating sea cities that may harness solar and tidal energy were voted the next most likely development (30%), followed by urban high rise farms where crops and animals are kept in tall, layered structures that combat space shortages (28%).  3D printed homes that can be bought ‘off the shelf’ (22%) and buildings with their own micro-climates that mean we can live in previously uninhabitable areas (21%) complete the top five.

The top three predictions were then visualised by architecture illustrators:

Super –Deep Basement below the Houses of Parliament:

·         6 levels of living and functional spaces including: gardens, parks, swimming pools, gyms, hotels, a football pitch and a secure bunker – designed to meet the future needs of MPs offering them a place where they can work late into the night, keep healthy with gym, pool and food outlets on site as well as accommodating offices for their staff teams and accommodation for those attending votes late at night 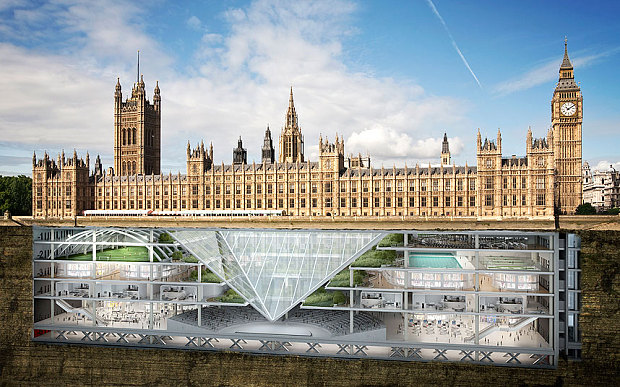 ·         Interlinking pods allow for living space within the city

·         Animals graze on pastures on top of high-rise London buildings with familiar landmarks in the background.

Many of the predictions made by the panel were influenced by environmental conditions, with global warming and predicted rising sea levels encouraging a focus on water-based architecture. One in three (30%) Brits believe that floating cities would be a viable option for the future, with 10% preferring the idea of developing underwater cities and 19% thinking floating living pods on major rivers would solve the problem of inner-city crowding.

The likely increasing population was another factor raised by the panel. According to research, this space constraint would catalyse the development of structures such as high-rise farms (15% would like to see these) and cities in the sky that build upwards in levels on top of each other (preferred by 13%).

It’s not all doom and gloom however, as the expert panel also noted that huge advances in technology and science would allow for some really exciting developments in the way we live. For example, the recent progress made with 3D printing is expected to continue to the point where entire houses will be available to print, after being bought ‘off the shelf’ and 16% would like to see this become reality.

Not only is there huge scope for how we buy and live in our homes, but also for the way that we travel, with 12% of Brits believing spaceports that will offer easy access to the Moon and Mars is on the cards!

Yesterday General Manager Adrian Wills said: “Rapid technological advances coupled with increases in population and global warming will have a huge influence on how we live, with underground, super high rise and even floating homes likely to feature in our future cityscapes.

“Impossible Engineering shows how a series of seemingly unconnected breakthroughs can be put together to create amazing feats of engineering, but anything could happen in the next 50 years.”

Dr Rhys Morgan, Director of Engineering and Education at the Royal Academy of Engineering says, “Breakthroughs in engineering work in the same way as breakthroughs in literature, music and lifestyle – an accumulation of different discoveries (or influences) is required to create the final catalyst for a new discovery. There is rarely a ‘eureka’ moment. As such, engineering feats which are currently out of reach require time for the pieces to fit together and the minds responsible for developing the ideas to work through all the wrong avenues before achieving what is currently impossible. This series, Impossible Engineering really highlights this collaborative nature of progress.”

Impossible Engineering premieres on Yesterday on Tuesday 26 May at 9pm

RNLI to open most controversial Shoreditch bar yet