The sculpture, which has been unveiled in time for the evening of the Summer Solstice (20th June), has been specially positioned to sit on little known ley lines and is set to become one of the key talking points in the capital this summer. 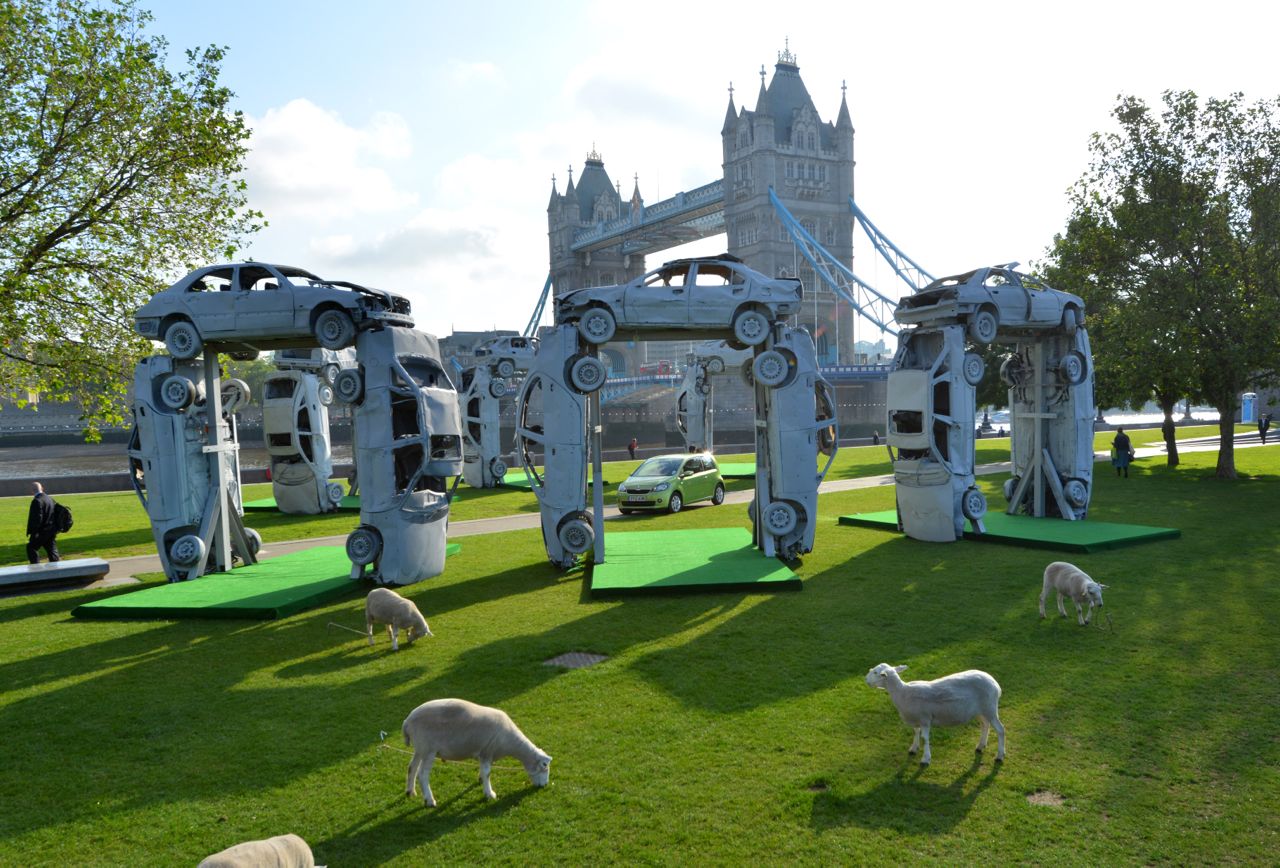 With the new car as its centrepiece, the audacious piece of automotive art dubbed ‘Citihenge’ by the makers, was specially commissioned to celebrate the launch of the ŠKODA Citigo.

The giant build will be in position on the Southbank on 19 and 20 June.

The ambitious piece of art, built using 18 scrap cars, stands at over five metres tall. Each henge is five metres wide and the commanding structure weighs a remarkable 36 tonnes.

Gun, a self-taught artist who specialises in big sculptures often made from machine parts, has exhibited at Chelsea Flower Show and The Grand Designs Show, Olympia, and was commissioned to produce a sculpture for the Tour de France.

The installation is the latest in a series of cultural creative projects undertaken by ŠKODA, which has included giant cakes, a car in a cage and collaborations with musicians Anastacia and DJ Tiësto. 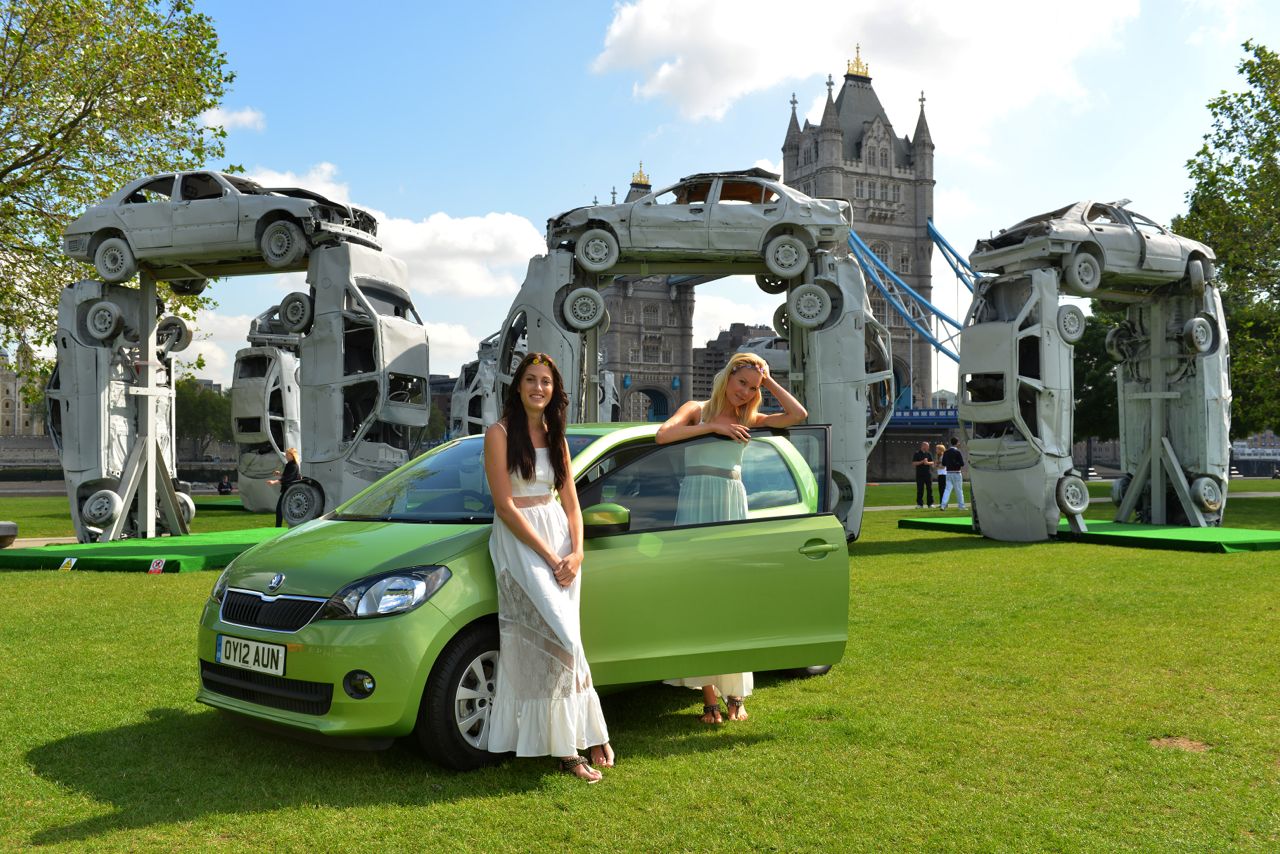 The beacon of economical motoring will remain at Potters Fields for two days before touring the UK, with a move to the Goodwood Festival of Speed and its celebration of car culture, in West Sussex from 28th June – 1st July.

Pietro Panarisi, ŠKODA spokesperson says: “The Citigo embodies the future of driving and is the smartest option for forward-thinking city drivers. While traditional cars struggle to perform well under the strain of city driving, the Citigo is designed to excel in the urban environment. Citihenge symbolises the beginning of a new era of motoring and we hope drivers across the country will recognise this important turning point.”

A snapshot of the coverage in the first 24 hours… 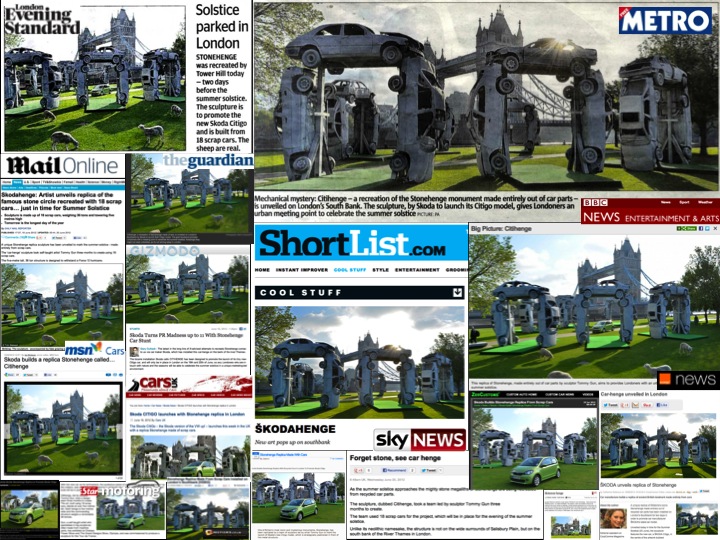 Tommy Gun, sculptor says: “The Citihenge project has been the most amazing challenge. Stonehenge is a huge, iconic structure and the Citihenge replica is too. It is made entirely from old car parts, which taps into my own childhood growing up on a farm where I used to love building and creating things with pieces of discarded machinery.”

Citigo re-defines what’s possible with a city car – small exterior dimensions yet exceptional interior space offering ample space for four adults. Great manoeuvrability, exceptional comfort and safety with high levels of equipment, Citigo has been designed to deal with almost anything life can throw at it.

• In 2011, ŠKODA UK completed a record year achieving registrations of over 45,000 up 9.2% when compared to the previous year whilst also reaching a record 2.3% market share.
• ŠKODA received 18 major awards in 2011, for its outstanding product and excellent customer service.
• ŠKODA has been in the top ten of the J.D. Power Survey of Customer Satisfaction for the past 19 years.
• ŠKODA Motorsport repeated its double win in 2011 as IRC Drivers’ & Manufacturers’ Champions, with Andreas Mikkelsen bringing home the IRC Drivers’ title for ŠKODA UK Motorsport.

• Citigo is ŠKODA’s newest model, a compact city car for a new generation of drivers on sale now at ŠKODA retailers across the UK.
• Citigo prices start from £7,630 OTR.
• Citigo’s 1.0 MPI 60PS Greentech model emits just 96g/km of CO2 and has combined fuel economy of 68.9 mpg.
• The ŠKODA Citigo provides great value for money, with standard equipment including front and side airbags, power steering and CD player with aux input, VED band ratings starting at A (the lowest possible) and insurance from Group 1E.