LONDON, 8th September 2011: Private Eye is Britain’s first, most successful and indeed only fortnightly satirical magazine. Founded in 1961, it has somehow managed to survive for half a century during which it has consistently entertained, informed and irritated its readers.

Over five turbulent decades it has developed its unique mix of jokes and journalism, comedy and campaigning, gags and gossip, laughter and libel, to cover the public life of the nation.

This year, Britain’s number one best-selling news and current affairs magazine marks its 50th anniversary on 25th October with a series of exciting events throughout the Autumn.

Ian Hislop comments: “I do not want anyone to think that this is all just a huge celebration of ourselves. Our 50th year is a chance to look back and take a dispassionate view of how marvellous we are.”

Released on Tuesday 20th September to kick off the anniversary year celebrations, Private Eye: The First 50 Years, an A-Z, is a lavishly illustrated, definitive history of the magazine, charting its rise from 300 copies of the first edition on 25th October 1961, to a fortnightly readership of 700,000, steered at the helm by Editor of 25 years, Ian Hislop.

Written by Private Eye journalist Adam Macqueen, who has been with the magazine since 1997, Private Eye: The First 50 Years, an A-Z, is an unsurpassed, fascinating history of Private Eye over the past 50 years.

Forming an in-depth, witty and occasionally critical appraisal, Macqueen has created the long-awaited volume containing everything you ever wanted to know about the  nation’s favourite satirical organ. At last the origin of Ugandan discussions will be disclosed, along with the story behind that Andrew Neil photo, and the identity of Britain’s Biggest Pseud. Plus the inside story of the magazine’s many high-profile legal battles, scoops and staff bust-ups, told by those who were there.

In addition to a wealth of new material, the book features exclusive interviews with current editor, Ian Hislop, his predecessor Richard Ingrams and co-founder, Christopher Booker, plus a host of other key figures past and present.

The book also contains exclusive reminiscences and revelations about former contributors including Peter Cook, Auberon Waugh and Willie Rushton, in addition to rare archive material, unseen photographs and an abundance of cartoons from the likes of Nick Newman, Tony Husband and Michael Heath – many never before published.

Adam Macqueen comments: “I’ve been digging up stories for the Eye for fourteen years, but a lot of the stuff I found out about the mag surprised even me. When I discovered it surprised the editor too, I figured I must be doing something right.” 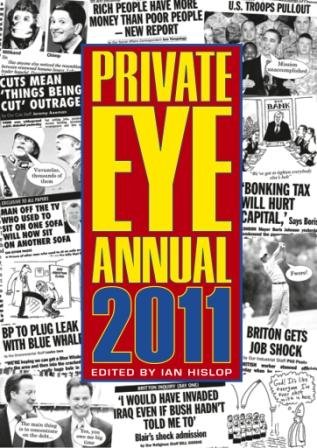 With the phone hacking scandal, the superinjunction fiascos and the European financial meltdown it has been a quiet year for news. Luckily Private Eye was there to fill the gap.

Consistently found in the best seller chart and selling in excess of 78,000 copies last year alone, it is a must for every Christmas stocking.

Opening on Tuesday 18th October and running for three months until 8th January 2012, Private Eye at the V&A is on display in the V&A’s Studio Gallery in South Kensington, London.

Private Eye at the V&A is a free exhibition and will explore the wealth of artistic talent that the magazine has fostered by showcasing the original artwork for some of the finest and funniest Private Eye cartoons. Over its 50-year history, the Eye has published and promoted the work of more than 90 artists, many of whom started their careers at the magazine, including Gerald Scarfe, Ralph Steadman, Willie Rushton, Barry Fantoni, Nick Newman, Michael Heath, John Kent and Ed McLachlan. The illustrations will be shown in thematic sections on politics, royalty and social observation. They are richly varied in style and tone and take the form of single cartoons with captions, long-running strips and caricatures.

Ian Hislop has chosen 50 of the best trademark front covers, one from every year the magazine has been published. The front covers will be arranged in a timeline, offering a graphic satirical history of the news over five decades.

The exhibition will evoke the atmosphere of the magazine’s Soho office, with a recreation of the editor’s paper-strewn desk. There will also be seldom-seen ephemera from the magazine’s past campaigns and court cases, as well as a life-sized cutout of Tony Blair, a stuffed dog, a flying Robert Maxwell and a giant inflatable banana.

Richard Ingrams served as editor from the 10th issue until 1986, and was then succeeded by Ian Hislop in 1986. It offers a unique blend of humour, social and political observations and investigative journalism. Published fortnightly, the magazine is read by over 700,000 readers.

Ian Hislop has edited Private Eye since 1986, and was absolutely thrilled to be voted the 97th most powerful person in the media by the Guardian this year.

Commentating on “a stellar year for the man who celebrates 25 years in the editor’s chair in October – half the life of the magazine” The Guardian continued “The Private Eye editor has challenged privacy injunctions, led the way on important stories – and has also managed to boost sales.

Hislop’s work has put privacy injunctions firmly in the spotlight. But less glamorous campaigns have also succeeded at the magazine, where sales of more than 200,000 a fortnight are the best for nearly 20 years.

Even in recent months, the In the Back column has led the way on care homes, Southern Cross and the failings of the Care Quality Commission, and Rotten Boroughs broke an important story on South Tyneside council’s legal battle with Twitter. The magazine revealed problems at Doctor Who – and who would want to be a sleazy hack with Street of Shame on the lookout?

Hislop’s personal appearances on behalf of the magazine, whether on Radio 4’s Today programme or before Commons committees, have been impressive, which is perhaps not surprising given his lengthy TV career.

He continues to be a driving force of BBC1’s Have I Got News for You. And successes such as Ian Hislop’s Age of the Do-Gooders this year have also seen him identified as one of BBC2’s representative faces by controller Janice Hadlow.”

Ian has made countless television and radio appearances, as panellist, essayist and presenter. Credits range from Newsnight Review, Question Time and University Challenge (‘The Professionals’), to Radio 4 series on the history of tax, the Victorians and church architecture.

As a writer, Ian progressed from Spitting Image to write sketches for Harry Enfield and television plays for Maureen Lipman and Dawn French. Most recently he co-wrote the family sitcom, My Dad’s the Prime Minister.

Adam Macqueen joined the Eye on work experience in 1997, and has been there ever since, apart from two years when he ran away to become deputy editor of the Big Issue. He writes mostly for the Street of Shame and Media News pages, as well as compiling the Number Crunching Column.

He has also freelanced for a great many other newspapers and magazines, and had a weekly slot as co-presenter on the Sandi Toksvig show on LBC as well as regularly appearing on Sky News.

His previous book, The King of Sunlight: How William Lever Cleaned Up The World, was a chosen title on both Simon Mayo’s book club on Five Live and A Good Read on Radio 4.