Paddy Power take Twitter to the Skies 10,000ft above The Ryder Cup.

Mischievous Paddy Power has taken to the clouds above the Medinah Country Club (USA) this weekend to deliver the world’s first ‘sky tweet’ campaign in support of Team Europe at the Ryder Cup tournament.

This week American Captain Davis Love III stoked the flames for a fiery confrontation, stirring up U.S. fans to deliver the loudest frenzy ever seen at the tournament.

Paddy Power today responded with an audacious plan to redress the balance for Team Europe, involving creating giant tweets in the sky, visible from over 20 miles, designed to rival any ground-level heckles.

Paddy Power’s twitter feed (@paddypower) is calling on European supporters to submit messages with the hashtag ‘goeurope’, a selection of which will be ‘sky-written’ by stunt pilots flying at 10,000ft in the world’s first Twitter campaign of its kind.

The company is using groundbreaking technology to ‘post’ 60 tweets across the Illinois skies throughout the weekend’s golfing action.

Each individual character is a staggering 200ft taller than the newly installed Shard skyscraper in London.

The aerial team craft the messages directly over the course but above restricted airspace to ensure the display is entirely inaudible to players yet highly visible to the 40,000 fans attending the tournament, plus the millions of TV viewers watching from across the globe.

Commenting on the campaign, Paddy Power said: “In previous years we have seen shocking scenes of American crowds heckling and barracking the European players. Rather than take a leaf out of the book of our noisy rivals on the course, we’ve elevated support for Team Europe to the heavens!  Our ‘sky tweets’ have given European fans the chance to have their messages seen on a massive scale, hopefully giving Olazabal and the guys a boost from home.”

The computer-controlled messages are delivered by five stunt planes flying in formation wing to wing and spelling out each character of the message with a vapour trail that is turned on and off as letters are built.

Computerised output controls the messages in the same way an ink jet printer forms its letters. Each message took around 90 seconds to form and spanned over 5 miles wide.

European Twitter fans visiting the game will have their phones taken off them by Ryder Cup security who enforce a strict ‘no smart-phones’ policy. However they won’t be missing miss out on any of the fun as Paddy Power relay the best messages across the Illinois skies.

Paddy Power is expected to secure a double entry in the Guinness Book of World Records for the ‘World’s Biggest Tweet’ and for smashing previously held records in the ‘Biggest Skywriting ‘category.

The activity is part of Paddy Power’s ‘We Hear You’ campaign.

Paddy Power ‘sky tweets’ will be happening across the Ryder Cup weekend so tweet your messages of support to @paddypower #goeurope. 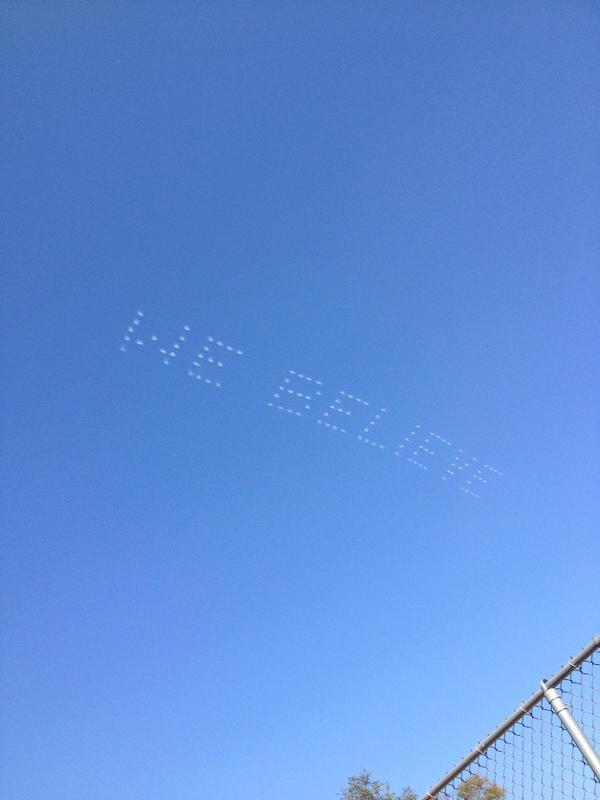