LONDON, Thursday 4th October 2012: Space battles, quantum entanglement, and love triangles with snack dispensers, are just some of problems facing the boys from the Dwarf as they return in a brand new series. Red Dwarf X, the 10th series of the legendary sci-fi sitcom, tonight on Dave.

Following a exclusive screening event for fans, held in Leicester Square last night, the wait for the series is finally over. 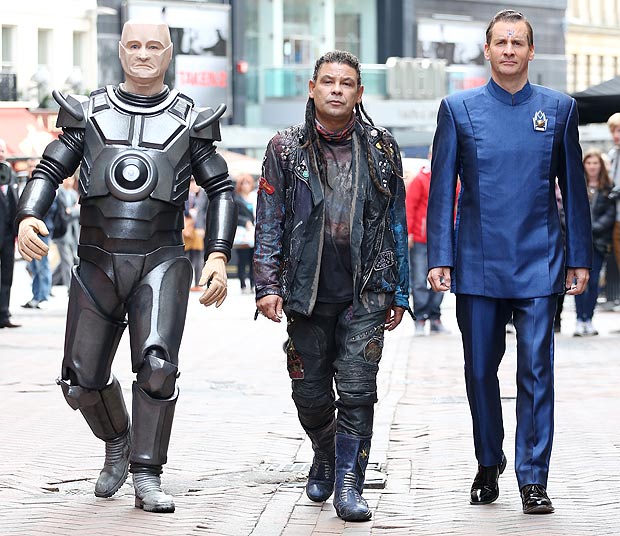 The brand new series, written and directed by Doug Naylor, begins with the Dwarfer’s mining ship still creaking though the wastelands of unchartered deep space, but the posse soon stumble upon the mysteriously abandoned SS Trojan.  As they inspect the ship Rimmer receives an SOS distress call from an old foe and is suddenly faced with the dilemma of his life.

Throughout the six part series Lister grapples with the problem of being his own father, gets involved in a love triangle with snack dispensers 23 and 34, while Kryten and Cat become quantum entangled forcing them to do everything in unison.  The posse also find themselves marooned in 23 AD where they rescue a famous historical figure with a beard.

The series final episode finds the boys surrounded by a Simulant War Cruiser and its fleet of attack ships.  Armed with only two forks and a pencil sharpener, the Dwarfers begin to wonder whether this is the beginning of the end.  Only one man can save them.  Unfortunately that man is Arnold J Rimmer.

Red Dwarf X will air exclusively on Thursdays at 9pm on Dave, and Dave HD, from Thursday 4th October.

Satirical and edgy, Dave is the home of witty banter.  Featuring the best in contemporary entertainment including Suits, QI, Mock the Week and Have I Got News For You, Dave also showcases popular original series, such as Argumental, Dave’s One Night Stand, Dara O’Briain’s School of Hard Sums, Alexander Armstrong’s Big Ask and Jo Brand’s Big Splash, all laden with the biggest names in British comedy. Where to find Dave: Sky channel 111, Virgin TV channel 128, Freeview 19.