Most tube travellers wouldn’t dare to eat the most important meal of the day during rush hour, but this week one commuter broke the unwritten rule of the underground by eating cereal on the tube in the most spectacular possible fashion.

The commuter caused a social media stir by coming onto the tube carriage with what appeared to be a regular briefcase, only to transform it into a mobile breakfast unit once she’d bagged a seat.

However, Londoners can rest easy as the cereal-scoffing commuter – which caused a sensation on Twitter earlier this week – has now been revealed as part of an elaborate marketing stunt by Kellogg’s to mark the launch of its new range of Special K cereal. 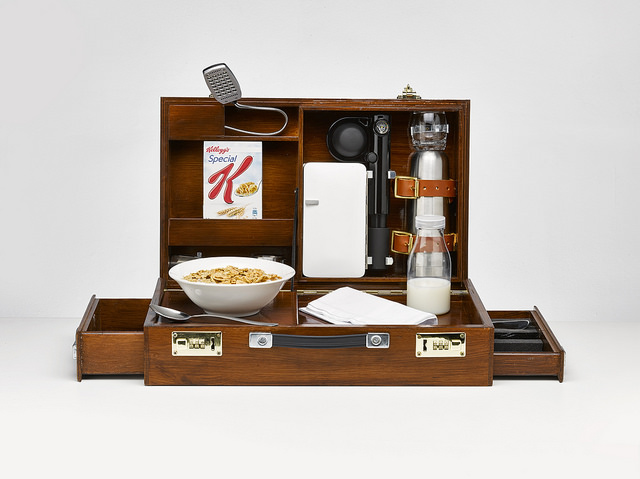 A crew of designers was specially commissioned by Kellogg’s to create the ‘Special Kase’, which was fitted with a fridge to supply cold milk, hidden side compartments to store bowls and a full set of cutlery, plus a space to hold boxes of cereal. 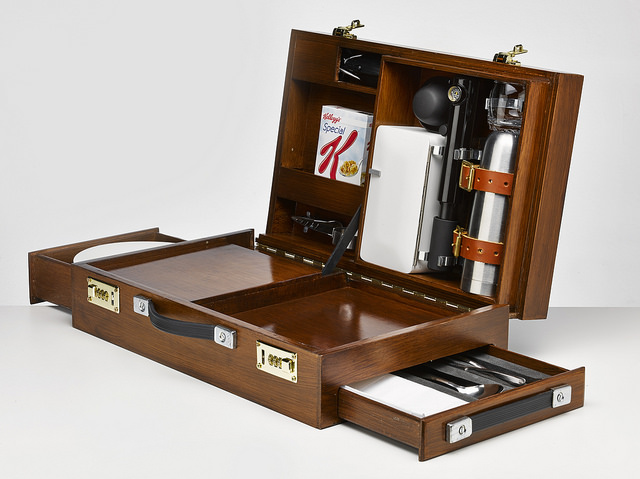 The custom made gadget, disguised as a wooden briefcase, also contains space for an espresso maker, juice extractor, glass holder and thermos flask for brewing a cup of tea or coffee and took 4 weeks to be designed and crafted by a specialist team.

Baffled passers-by looked on in amusement, awe, indignation and wide-eyed disbelief as the commuter sat down next to them and conducted her breakfast routine from start to finish.

The reactions were captured on hidden cameras.

The cereal giant had deployed an actress named Jo Cummins to frequent the busiest Tube lines with the ‘Special Kase’, all in aid of injecting a little bit of colour into the usual dreary morning journey to work.

Jo comments: “It was tough to negotiate a seat during rush hour but once I sat down, people couldn’t keep their eyes off the case. I had more conversations with members of the public this week than I’ve ever had in my whole time using the tube service. It certainly perked up the commute for some, while others were a bit taken back by my odd behaviour.

“Regardless of how much you love breakfast, I wouldn’t recommend travelling with a full bowl of cereal on the Central line around St Paul’s at 8:45am.”

Liam O’Brien of Kellogg’s comments: “Eating on the tube is often given a frosty reception, so it’s no surprise that when Jo poured the ice-cold milk on her Special K, she was rewarded with ice-cold glares from some baffled commuters.

“With almost 1 in 3 adults missing breakfast every day, we wanted to show that even for people with the busiest lifestyles, there’s always time for a morning meal. We hope the ‘Special Kase’ catches on and has people thinking inventively about how to eat the most important meal of the day.”

Prone To Dad Dancing? You may have EPS (Embarrasing Parents Syndrome)