A 1.7m gingerbread house replicating the iconic McCallister house has been unveiled by Disney+ to mark the 30 th anniversary of Home Alone.

Disney+ commissioned the award-winning artist and cake designer Michelle Wibowo to recreate the Home Alone film set using edible ingredients, following the film’s UK release in 1990. Celebrated characters and other unforgettable items of the fan favourite movie have been given the full festive gingerbread treatment.

The campaign was devised and delivered by creative PR agency Taylor Herring.

This much loved festive film joins Disney+ as the service celebrates its first Christmas in the UK, becoming the perfect place for fantastic entertainment this December with a huge line up of seasonal favourites, original series and blockbuster movies.

Michelle began by studying the architecture and exterior of Kevin McCallister’s much-loved Chicago suburbs family home and then sketched designs of the different features, before baking the gingerbread and recreating the film’s famous set and fan favourite moments.

It was a meticulous process that took more than 300 hours and is full of edible detail that Home Alone enthusiasts will love. Eagle-eyed fans will be able to spot gingerbread Kevin in the snow after falling off his sled, a tasty tarantula on burglar Harry’s face after a run in with Buzz’s favourite pet.

Little Nero’s pizza delivery car and boxes from the McCallister’s favourite pizza place and the infamous ‘Oh-Kay Plumbing and Heating’ van belonging to the Wet Bandits themselves Harry and Marv.

The scene also includes Kevin’s treehouse, complete with tyre swing, the paint cans used in one of the booby traps, an icing figure of Kevin’s neighbour Marley as well as the statue in the front garden that is continually knocked down by various vehicles. In total, the creation includes 63 trees, 33 windows, 14 pizza boxes and 6 lamp posts. 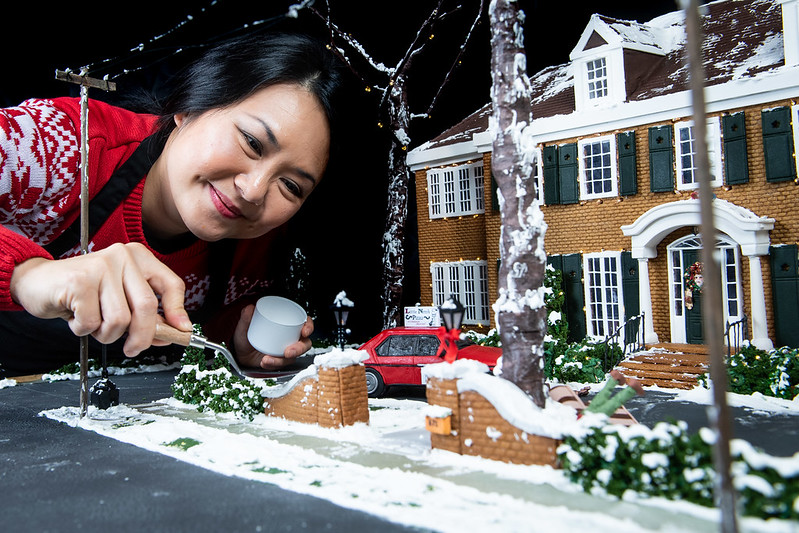 Michelle Wibowo, cake artist who re-created the famous home, said: ‘’I jumped at the chance because it is one of my favourite Christmas movies – it doesn’t really feel like Christmas in our house until we have seen it at least twice! I had so much fun making it look festive and I loved making those cheeky characters Kevin and burglars Harry and Marv. The scene also includes the infamous paint cans, the broken statue and the Christmas wreath on their front door – I hope everyone will enjoy spotting iconic details from the movie!’’

The film follows Kevin McCallister (Macaulay Culkin) who must protect his home from two burglars after mistakenly being left behind by his family who have flown to Paris for Christmas. Home Alone was a sensation when it hit UK shores and spawned two sequels.

Luke Bradley-Jones, General Manager, Disney+ EMEA, comments: “I can’t quite believe Home Alone turns 30 this month but it still makes me laugh as much as the first time I saw it all those years ago. This film, along with a whole host of other festive favourites, Hollywood blockbusters and brand new originals are guaranteed to fill you all with festive cheer and we’re looking forward to Disney+ being a firm favourite with everyone this Christmas.’’

The Home Alone gingerbread scene will travel to the Oak Centre for Children and Young People at The Royal Marsden in Surrey where the festive creation will be displayed for paediatric patients and
their loved ones to help build festive memories together.

Home Alone is available now to watch on Disney+, along with Home Alone 2 and 3. Beloved blockbuster movies such as Frozen and The Muppet Christmas Carol stream alongside new festive

Original films such as Noelle starting Anna Kendrick, and Godmothered with Isla Fisher. TV festive specials include LEGO Star Wars Holiday Special and High School Musical: The Musical: The Holiday Special. Confirmed in October, the brand new film from PIXAR will also stream exclusively on the service on Christmas Day. Soul, stars Jamie Foxx and Tina Fay and introduces Joe Gardner – a middle-school band teacher who gets the chance of a lifetime to play at the best jazz club in town. But one small misstep takes him from the streets of New York City to The Great Before – a fantastical place where new souls get their personalities, quirks and interests before they go to Earth.

Subscribers will be able to stream Disney+ for £5.99 a month, or £59.99 a year, on nearly all major mobile and connected TV devices at launch, including gaming consoles, streaming media players, and smart TVs.

Home Alone is available now to watch on Disney+