Guided by the time-travelling Doctor, Dermot pays a flying visit to some of TV’s biggest names, including Bruce Forsyth,  Ant & Dec, Dot Branning en-route to the star-studded ceremony at London’s 02 arena. The evening sees Matt Smith nominated in the Most Popular Drama Performance category, with Doctor Who shortlisted for Most Popular Drama.

Tonight’s glittering event will also  showcase one of pop music’s most unlikely duets tonight – Happy Mondays legend Shaun Ryder and I’m A Celebrity winner Stacey Solomon. The performance is expected to include the indie anthem Step On. 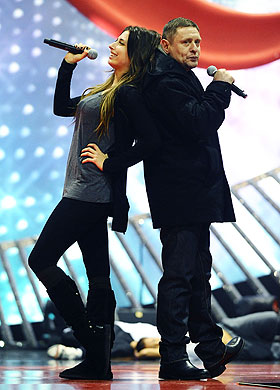 X Factor winner Matt Cardle will also sing tonight, backed by a 40-piece orchestra. Chilean mine hero Luis Urzua, 54, has been flown in to present an award.

With Coronation Street currently celebrating its 50th Anniversary and making headlines after that tram crash, the stars of Weatherfield will be hoping to repeat last year’s NTA success with another win in the Serial Drama category.  But as always EastEnders, who’ve just notched up their own 25th Anniversary, will give them a run for their money.

As the massively popular X-Factor prepares to conquer America will it be the viewers’ choice again in the Talent Show Category?  Fierce rival Strictly Come Dancing has beaten it before and could waltz off with the prize again.  Simon Cowell has a second contender here with Britain’s Got Talent. Dancing on Ice completes the list of nominees.

Host Dermot O’Leary will be inviting one lucky audience member up on stage on the night to present an award.

You can vote for your TV favourites by phone on 0901 888 2011.  Calls cost no more than 26p per minute from a BT landline plus no more than a 12p connection charge. Calls should last no longer than 6 minutes. Calls from other networks may be higher and from mobiles will be considerably more.

Or you can vote free online at www.nationaltvawards.com New votes will be added to those submitted in the first round.