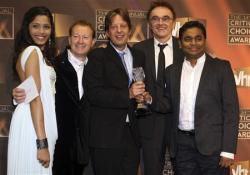 “The success for Film4 at the Golden Globes is testament to the creative talent that exists in the UK. In this current climate it is a real boost to the British film industry to be recognised for its achievements. At Film4 we are about nurturing projects that wouldn’t necessarily secure funding elsewhere to bring fresh ideas to life on the big screen.”