easyJet is encouraging adults over the age of 45 to join the airline in a new recruitment drive from easyJet.

The campaign, by Taylor Herring, sets out to show that people at any age with the right skills can become cabin crew.

‘Empty nesters’, parents whose children have left the family home or have started their own careers, and anyone looking for a new career challenge later in life, are among those being encouraged to apply. 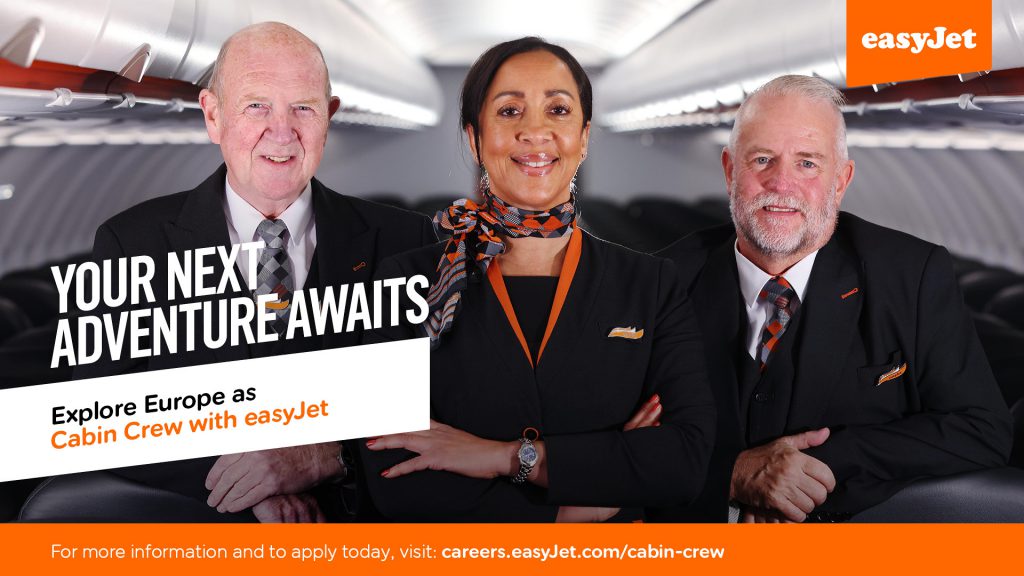 The campaign comes following recent research by easyJet which revealed that, in a survey of 2,000 British adults over 45, over three quarters (78%) said that they would like to take on a new challenge once their children have flown the nest. Over half said (58%) they were most excited about starting a new career. 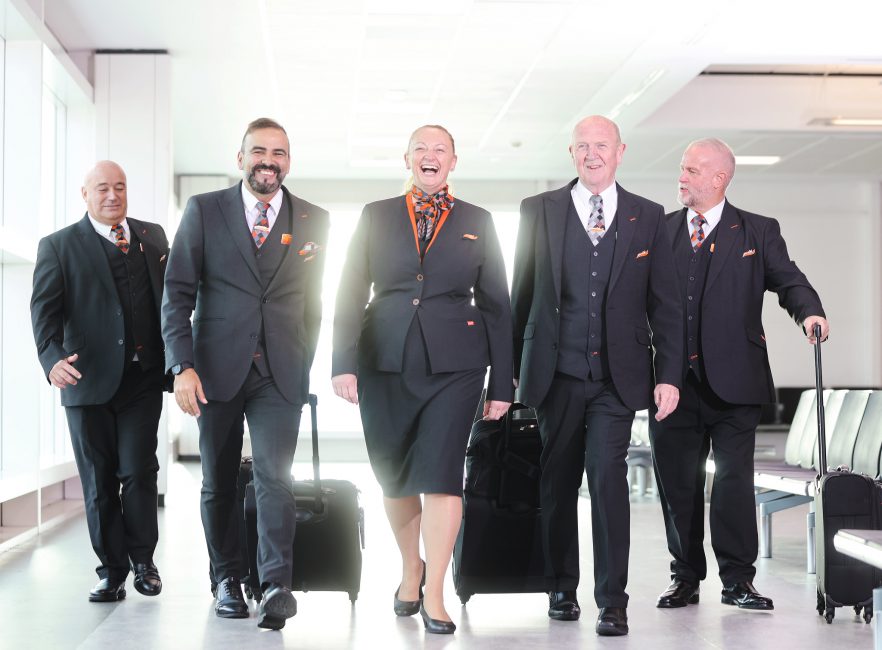 Over half (57%) of respondents also said that now their children are not dependent on them anymore, they hope to find a new career in something they are truly passionate about.

The new recruitment campaign has been launched with a series of new ads featuring real life cabin crew who joined easyJet in the past year including Mike Tear (57), Gary Fellowes (63) and Carlos Santa Monica (48). 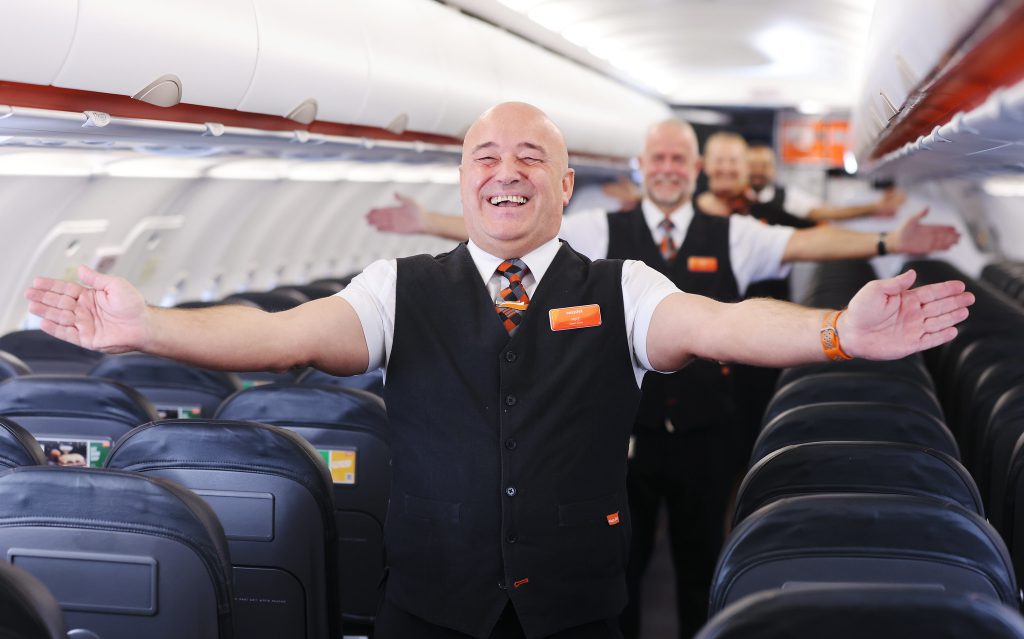 easyJet is encouraging even more to apply, with their wealth of life experience and transferable skills, such as customer service and people management, making many ideal candidates for the job.

The campaign launch comes during National Older Workers Week, which is taking place from 21 to 25 November 2022. Latest figures from the Department for Work and Pensions show that there are over nine million 50+ workers now on payrolls, an increase of more than 210,000 since last year.

Neil, 59, followed in the footsteps of daughter Holly, 29, to become cabin crew in 2019 having previously worked in engineering and sales.
Speaking about his decision to start a new career as cabin crew, Neil said:
“I decided I needed a new challenge and wanted a job I could enjoy and would look forward to work each day. Knowing how much Holly loved the job and with her encouragement I applied and found myself in Luton academy for training and I have loved it ever since.”

Karen, 54, and Daniela, 21, a mother and daughter, are also both easyJet cabin crew who started flying with the airline this year. Mum, Karen, who previously worked as a holiday rep while living in Spain, was inspired by her daughter to apply to become cabin crew as she was looking for a change of career.

Speaking about following her daughter into a job at easyJet, Karen said:

“I’ve always loved travelling and exploring new places, and I’m a real people person. I was recently after a complete career change, and I wanted to be cabin crew when I was younger, so when Daniela started her role with easyJet I was inspired to try it myself. And I’m so glad I did!” 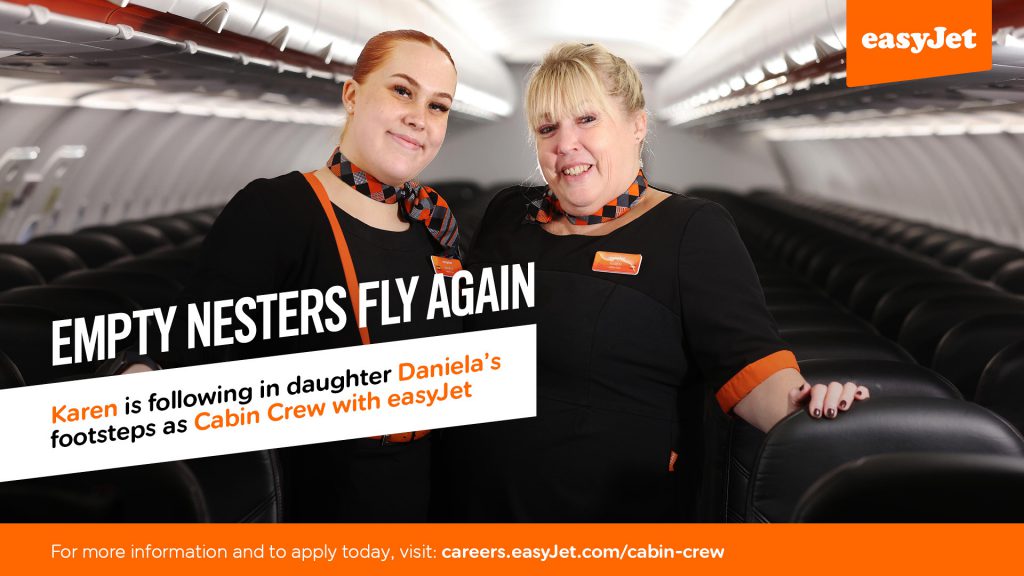 The survey also revealed that many ‘empty nesters’ are now turning to their children as motivation for seeking out a new vocation, with over two thirds (67%) feeling inspired by their children’s career success and growth.

One fifth (20%) of parents even said they would love to work in the same company as their children to spend more time with them.

Over six in 10 (63%) of those surveyed said that a career that allowed them to travel would be most desirable, with almost three quarters (70%) saying that travelling more is the one thing they have always wanted to do.

The research also revealed the top 10 most desirable new career choices for the over 45s. Charity work and volunteering topped the list, followed closely by being a paramedic, with cabin crew and teacher also in the top five.

“At easyJet, our people are at the heart of everything we do and it’s the warm welcome and excellent customer service that our cabin crew are famous for. All our brilliant crew who are part of our new campaign are a great example of how being cabin crew is a fantastic job no matter what your age and so we want to encourage even more people like them to join us.

“If you’ve got a passion for travel and people and want a job that’s different every day, then we can’t wait to welcome you on board as part of the team.”

For more information about a career as cabin crew with easyJet visit: https://careers.easyjet.com/cabin-crew/