Edinburgh, 23rd August 2016: Award-winning entertainment channel Dave has announced the winner of the ninth annual award for Dave’s Funniest Joke of the Fringe.

In a brand new show for the Edinburgh Fringe Festival, West Bromwich-based comic Masai Graham produced the joke which 27% of the respondents voted their funniest joke of the Fringe; ‘My dad suggested I register for a donor card, he’s a man after my own heart.’ 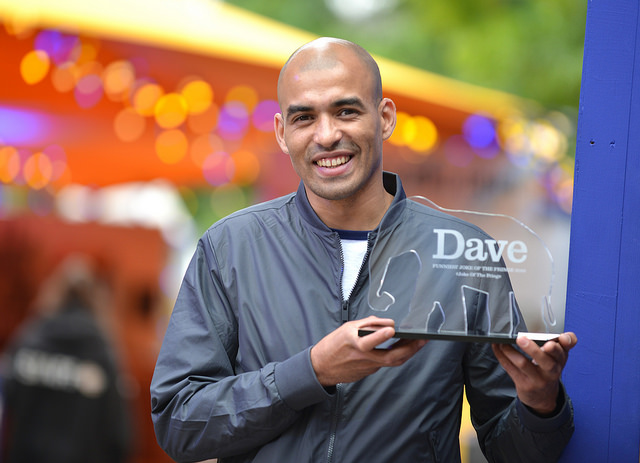 The announcement is the ninth year for the coveted award whose previous winners include Tim Vine, Rob Auton, Stewart Francis, Zoe Lyons and Nick Helm.

In its mission to find the most hilarious one-liners, Dave enlisted the help of an expert panel of ten judges, consisting of the UK’s foremost comedy critics.  They scoured venues at the world-famous Edinburgh Festival Fringe over a week-long period to nominate their five favourite jokes. The shortlisted gags were then put to 2,000 Brits, with no reference to the comedians who told them, who then voted for the jokes they found the funniest.

“My dad has suggested that I register for a donor card.  He’s a man after my own heart.” – Masai Graham– 27%

“Apparently 1 in 3 Britons are conceived in an IKEA bed which is mad because those places are really well lit.” – Mark Smith – 21%

“I went to a pub quiz in Liverpool, had a few drinks so wasn’t much use.  Just for a laugh I wrote The Beatles or Steven Gerrard for every answer… came second.” – Will Duggan – 20%

“Brexit is a terrible name, sounds like cereal you eat when you are constipated.” – Tiff Stevenson – 20%

“Don’t you hate it when people assume you’re rich because you sound posh and went to private school and have loads of money?” – Annie McGrath – 15%

“Is it possible to mistake schizophrenia for telepathy, I hear you ask.” – Jordan Brookes – 15%

“Hilary Clinton has shown that any woman can be President, as long as your husband did it first.” – Michelle Wolf – 15%

“I spotted a marmite van on the motorway. It was heading yeastbound.” – Roger Swift – 14%

On being awarded the top spot, Masai Graham, self-proclaimed “General Punochet”, said “I’m proud and honoured to win Joke of the Fringe. The funny thing is that it was Dave’s Joke of The Fringe that inspired me to become a comic. I remember picking up the paper years ago, reading the top 10 gags and wondering if I could write a decent one myself, so it feels fantastic to have actually won!”

In order to compile the shortlist, each of the judges sat through an average of 60 different comedy performances and sifted through more than 3,600 minutes of material. This meant they each had a potential pool of around 7,200* different jokes to choose from.

The Dave award, which is open to both established and up-and-coming comedians, pays homage to the wealth of talent on offer at the Edinburgh Festival Fringe whilst shining a spotlight on the individual jokes, not just the performances. In fact, so as to ensure the jokes are ranked fairly, the comedian’s name or show are not revealed during the voting process – it is purely down to the jokes themselves.

Steve North, General Manager of Dave commented: “The Fringe is renowned for being the best place to spot new and emerging comedy talent, and although there are some returning contenders in our top 10 this year, there is a high volume of new talent which is very exciting to see.”

The Edinburgh Fringe Festival is widely acknowledged to be the biggest arts festival in the world and takes place every August for three weeks in Scotland’s capital city. Starting in 1947, it was seen as a post-war initiative to reunite Europe through culture, and was so successful that it inspired more performers than there was room for.

Banks for money or for emotions?