Dating Party At The Top Of The Shard?.

The UK’s leading activity based dating site, Doingsomething.co.uk will hold the ultimate ice breaker night 800ft above London at The View from The Shard 48 hours before Valentine’s Day.

Will you find Mr or Miss Right just in time? Even if you don’t, you will have an incredible night with lively London singles. 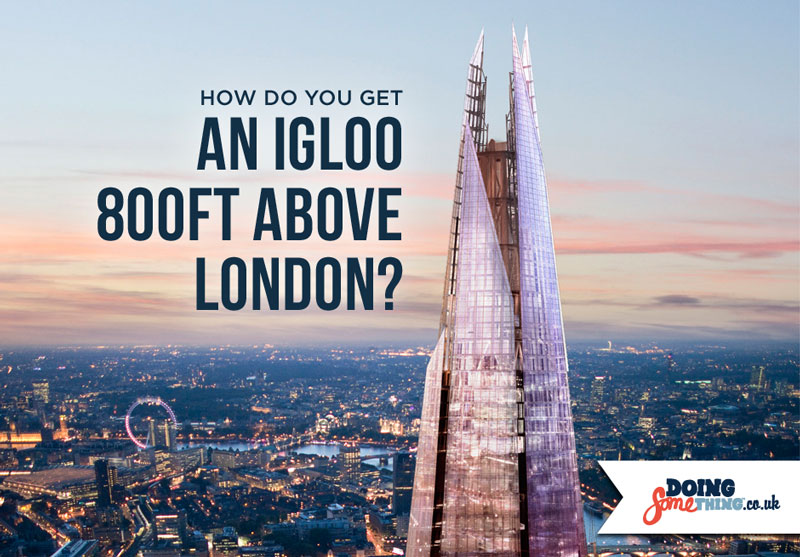 Reaching new heights of dating, DoingSomething.co.uk in partnership with The View from The Shard are pleased to announce the arrival of the World’s Highest Urban Ice Bar and the first ever dating party on Levels 69 and 72 of Western Europe’s tallest building – an exclusive one-night only event on Wednesday 12 February with a bespoke built ice bar and an igloo for singletons to snuggle up in.

Watch the sun set over panoramic views of the London skyline from the cosy 5ft tall, two tonne igloo created by internationally renowned ice artist Percy Salazar – decked out for comfort with blankets. Ice artist to the stars, Percy has previously worked on ice sculptures for the Queen, Stella McCartney and Lawrence Dallaglio.

The spectacular 360 degree views take in London’s most famous landmarks for up to 40 miles, including the Olympic Stadium and Canary Wharf to the east, Hampstead Heath and Alexandra Palace to the north, Buckingham Palace, the London Eye and Wembley Stadium to the west, and Crystal Palace to the south.

To keep the party alight, there will be live sets from London’s hottest DJs Nick Decosemo (Editor of Mixmag), Luke Brancaccio (Founder of hip new West London house label City Seven), Le SoSo (dance stage curator for Cornish boutique festival Leopallooza) who will all be playing cool dance grooves. And Goldbars and Lexicon (For the Love of Mic: the rap club night with a sense of fun) who will be spinning ice cold classics for people to warm up to including: Ice Ice Baby (Vanilla Ice), Cold as Ice (MOP) and It Was A Good Day (Ice Cube).

Duncan Welsh, Events Manager at The View from The Shard said, “We’re very excited to be working with DoingSomething.co.uk on the first ever singles event at the top of Western Europe’s tallest building. The View from The Shard is surely one of London’s most romantic destinations, with breath-taking views of the city – we saw two marriage proposals within the first 10 minutes of our opening! With an ice bar and igloo on Level 72, 800ft above ground, this is set to be one of the highlights of the dating scene this February.”

Dating site DoingSomething.co.uk are staunch believers that dates should give people something to talk about.

Matt Janes, DoingSomething.co.uk CEO and co-founder, said, “If a date involving an igloo 800ft above London doesn’t give you something to talk about then we don’t know what will! Our site is based around activities stimulating conversation from the get go. And this night will be the ultimate ice breaker.’

As if this wasn’t enough the first 200 guests will receive complimentary sorbetto and gelato courtesy of Snowflake Luxury Gelato. There are two artisan gelatos for guests to choose from including Hazelnut and the Valentine’s Special, Blind Date and Honey Gelato. Alternatively try a sumptuous sorbetto, flavours include Raspberry, Mango and Passionfruit and the award-winning Extra Dark Chocolate.

Daters will witness a new Guinness World Record on the night as the one-night only ice bar will become the World’s Highest Urban Ice Bar.

Tickets priced at £35 for singles. Or just £30 each if you buy a pair for you and your Wingman/Wingwoman.

Includes access to The View from The Shard’s viewing platforms on Levels 69 and 72 (worth £30) throughout the night, an after party, and one month’s subscription to DoingSomething.co.uk (worth £29).