NVA Entertainment Group (NVA) brokered a multi-million pound deal that will see Cole and Jay-Z work together on a number of new ventures. ‘The 40/40 London’ will be the first project of the partnership. 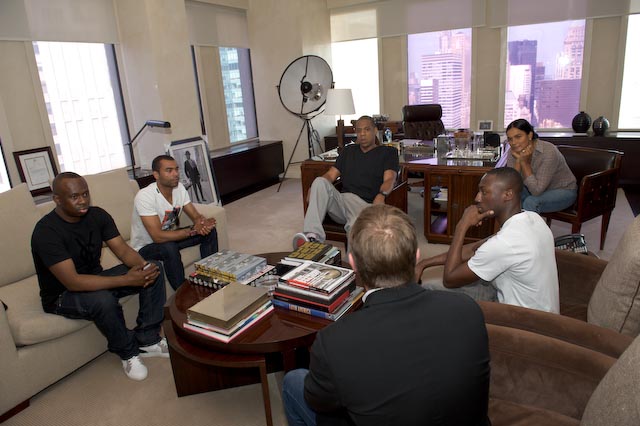 The management team will be appointing a top chef to deliver a modern American themed menu for the restaurant/bar that will feature top DJ’s and A-list artists. A short-list of three potential sites is now under consideration with a final decision on location expected in August.

The 40/40 London will give first option on jobs to talented, long-term unemployed young people. Each month a percentage of profits from the project will go to local youth charities for music and sport projects in deprived communities.

The grand opening party to be held next year will be similar to the 40/40 openings thrown by Jay Z in New York, Las Vegas and Atlantic City and will be attended by a host of stars from music, sport and entertainment. NVA are in talks with UK broadcasters over exclusive TV opportunities.

NVA has a high profile track-record in sport and entertainment working with the likes of John Terry, Robinho, Usain Bolt and Antonio Valencia.

Jay-Z said; “London is one of the most vibrant and exciting cities in the world and the perfect location for our new venue. I’m excited about working with Ashley and NVA Entertainment Group on a range of new projects and The 40/40 London is going to be the hottest place in town.”

Cole said; “I am delighted to be working with Jay Z I have grown up listening to his music and now to be doing business with him is amazing and the projects we do will be delivering much needed funds back into sport and music on a local community level as well as helping talented young people get back to work.”

40/40 Partner Juan Perez said; “The partnership of Ashley and Jay Z along with our entire 40/40 Club team is the ideal fit for bringing our brand to London.  The 40/40 Club is not only a brand, but a lifestyle that suits the nightlife and sports world and that makes it a perfect fit for London.”

NVA Entertainment Group is part of the NVA Holdings group of companies and its a multi faceted Sports, Music, Film and Fashion management company looking after high profile and new emerging talent.

The 40/40 Club, located at 6 West 25th Street, is an all American sports bar and nightclub owned by hip-hop mogul Jay-Z and partners Desiree and Juan Perez.  The 40/40 Club is the premiere sports bar and lounge in New York City, hosting some of the most memorable events and parties over the past 9 years.

Show Me The Funny: ITV launch search for a stand-up superstar