LONDON, Monday 29th April 2013: All Tomorrow’s Parties – the uniquely British alternative music and arts festival have announced that they will be calling time on their Camber Sands based holiday park events this November with two final festivals which will play out under the banners End of an Era parts 1 & 2.

Featuring some of the best loved acts that have graced the ATP stage over the last fourteen years, the much loved promoters promise to bow out in style with ‘a party to end all parties’ at the final two events.

The move will allow ATP to focus on their growing schedule of city and international based events in 2014 and beyond. 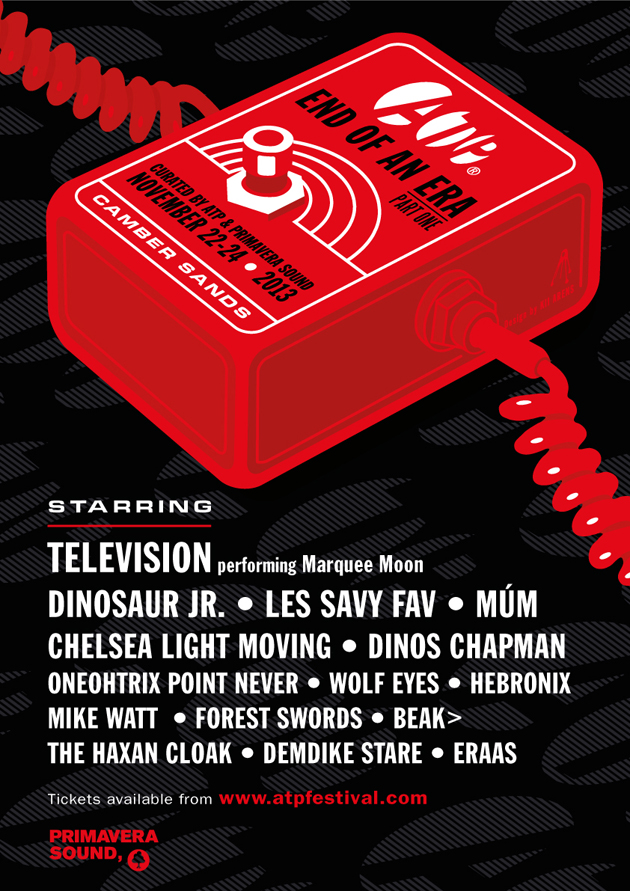 The first details of the final shows are announced today with many more acts to be added shortly.

All Tomorrow’s Parties present End of an Era part 1 will kick-off at Camber Sands from the 22nd – 24th November curated by ATP in partnership with the feted Spanish festival Primavera Sound.

Artists confirmed thus far include the seminal post punk rockers Television performing their classic 1977 album Marquee Moon in its entirety as a UK exclusive, Sonic Youth luminary Thurston Moore’s Chelsea Light Moving and the hugely influential Dinosaur Jr. Artist Dinos Chapman – one half of the notorious art duo will also be taking to the stage for one of the first performances of his electronic album ‘Luftbobler’. 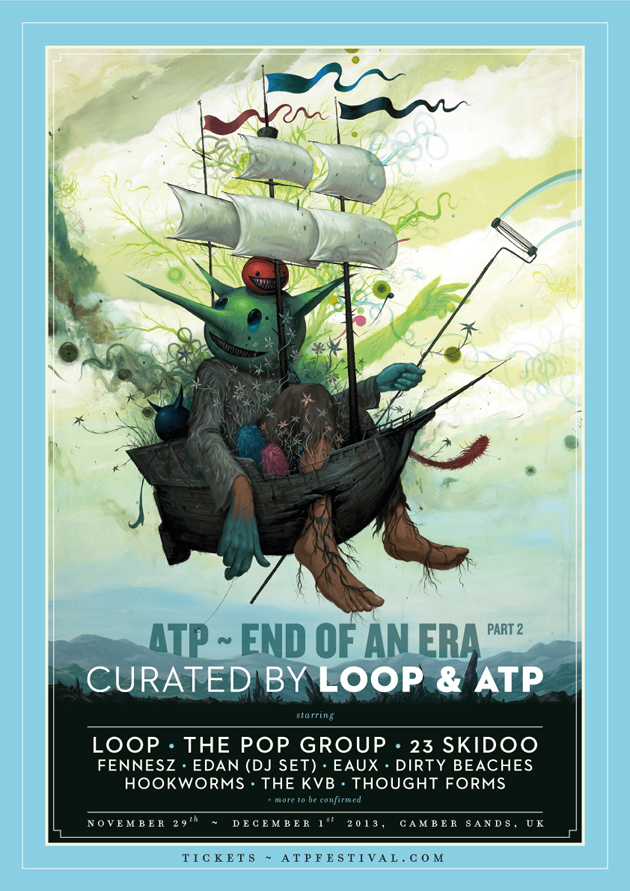 Fra Soler of Primavera: ‘When we first started Primavera Sound, ATP was already running and we were always delighted by their amazing line ups curated by amazing people. Though our festivals are slightly different we always felt there was a lot in common between us. Then we met and it was clear that working together was the following step. ATP stage at Primavera Sound has been an essential part of the event for years now and curating a festival where we´ve been having so many (heavy) parties is a dream come true and one of the nicest things we’ve ever been asked to do.’

The final festival – End of an Era part 2 will take place from the 29th November – 1st December and to mark the occasion, LOOP – the much loved art rock collective who became Peel Session stalwarts in the late 80’s have reformed to headline and curate, alongside ATP.

Robert Hampson of Loop: ‘ATP is the only place this could happen and be done well. Who else would offer the chance not only to play but also curate some of the bands alongside Loop on the day. It’s quite special to be able to do this and make it happen. Besides, Barry Hogan has pestered me for so long about this, it would seem rather unfair not to let him have his 5 minutes of fame getting Loop to play again.’

Founder Barry Hogan who runs the events in partnership with his wife Deborah comments: ‘when we started all this fourteen years ago, we had no idea how a festival curated by a single artist and based in a family holiday camp would play out. It was a mad idea that somehow came to fruition helped by the fact that people were looking for something different from the overpriced conveyor belt corporate rock sponsor-fests that populate the British summer. Looking back we have so many great memories – where else would you find Iggy Pop, Matt Groening, Patti Smith or Nick Cave holed up in a basic chalet at a Pontins’ Holiday Camp? The support from the artists and festival-goers alike has been incredible but it’s time to move on and look towards the future, it may also be time to let Camber Sands rest in peace!’

About All Tomorrow’s Parties:

All Tomorrow’s Parties was one of the very first boutique music festivals to launch in the UK. The ensuing fourteen years have seen the festival grow in stature to encompass concerts all around the world. Much imitated but never bettered, the much loved brand has grown to become a treasured British institution whilst garnering international respect and acclaim.

The appeal of ATP lies principally with the festival’s unique proposition; a music festival curated entirely by a single artist and held at an old school British holiday resort where the bands stay in the same accommodation as the festival goers. The festival further set itself apart from the larger corporate events by continuing to shun any corporate sponsorship and any notion of VIP rooms making for a uniquely egalitarian festival experience.

Described by founder Barry Hogan as a ‘mixtape of a festival curated by your favourite band’, All Tomorrow’s Parties actively encourages festival goers to seek out and champion new music. Past curators read like a who’s who of the alternative music/arts scene and have included Sonic Youth, Simpson’s creator Matt Groening, Portishead, My Bloody Valentine and Jim Jarmusch.

Launched in the wake of Belle and Sebastian’s groundbreaking Bowlie Weekender in 1999, All Tomorrow’s Parties first festival curated by Mogwai took place in 2000 at Pontins Holiday Camp in Camber Sands. Camber Sands continued to provide the backdrop for ATP until public demand necessitated a larger venue and the festival moved to the 5,500 capacity Butlins in Minehead in 2005.

In recent years the festival has expanded further; hosting a series of international events whilst maintaining its legacy of being intimate and fan-friendly. Sold out events in the US and Australia, curated by Nick Cave and Jim Jarmusch were met with overwhelming critical acclaim with US rock bible, Rolling Stone naming ATP ‘the best rock festival in America’. Nick Cave will return to headline ATP’s inaugural festival in Iceland this June, naming the event ‘my favourite festival in my favourite country’.

The team behind ATP is also responsible for the Don’t Look Back concert series, where acclaimed artists perform a classic album in its entirety. The series opened the series with Iggy and The Stooges performing ‘Funhouse’ and further performances have included Public Enemy performing ‘It Takes a Nation of Millions…’, Sonic Youth performing ‘Daydream Nation’, Ennio Morricone performing his classic film soundtracks and the Stooges revisiting their seminal album ‘Raw Power’.

Praise for All Tomorrow’s Parties:

‘In a world of corporate sponsorship and promoters who don’t really give a fuck about music it is a delight that ATP exists and flourishes.’ – Portishead

‘Camber Sands in 1999 seemed like a kind of defining moment for so many people – both the band and those who attended. Apart from firmly establishing the link between rock and holiday camps (embedded by the subsequent ATPs), Bowlie seemed like an internet age event, while most of us were still struggling with dial-up connections. A small, friendly and non-corporate festival before the festival market was well and truly saturated with events of all shapes and sizes.’ – Belle & Sebastian

‘I’ve been to a number of music festivals, but ATP is my favourite.’ – Jim Jarmusch

While All Tomorrow’s Parties are calling time on their Camber Sands festivals; their summer line-up of City based concerts continues to grow. On May 4th as part of the bank holiday weekend, All Tomorrow’s Parties will present Yeah Yeah Yeahs as curators and headliners for the third British I’ll Be Your Mirror event at Alexandra Palace.

In May and June, ATP will hold their final Summer holiday camp festivals. Between May 10th and 12th TV On The Radio have chosen a diverse line up that includes De La Soul and DOOM. From June 21st-23rd Deerhunter will curate the event, playing their first three albums in full and picking a line up that includes The Breeders and Steve Reich.

Tickets for End of an Era parts 1&2 are available from www.atpfestival.com