Last week the most creative minds in marketing, media and tech congregated again in France to attend the annual Cannes Lions International Festival of Creativity. This year there was a grand total of 41,170 entries received across the 24 Lions so once again we have sifted through the campaigns to bring you our top 25 (in no particular order).  Enjoy!

Taking home the PR Grand Prix, the Fearless Girl was created to symbolise the power of female leadership designed to stand the test of time. The statue, installed in time for International Women’s Day, shows a young bold girl standing defiantly in front of the pre-existing bull on Wall Street.

Cheeto’s championed the individual nature of their snack product’s design by challenging its customers to find the most interesting Cheeto’s in shapes ranging from guitars and seahorses to Abraham Lincoln for inclusion in possibly the strangest museum to date. With the addition of a $60,000 cash incentive to enter they received well over 120 thousand submissions.

On a small island where there are more sheep than people it is unsurprising that the Faroe Islands had not yet been mapped by Google Street View. To combat this they enlisted some of their wooly residents, with the help of some 360 cameras, to map out the gorgeous countryside and show off the natural beauty of the region.

In “Meet Graham” we are introduced to a rather strange looking gentleman to say the least. But his peculiar stature is what makes Graham so special as he demonstrates how the human body would have to evolve to survive serious car accidents.

To those of us who worship the late literary greats, long since deceased, owning a signed copy of their work is either a distant day dream or an endeavour due to set us back thousands. To make some of these dreams a realisation Bol.com created a robotic arm with software designed to learn and mimic an author’s individual handwriting delivering signatures so accurate even experts struggled to tell the difference.

“Louise Delange’s” Instagram upon first glace appears to show a picture perfect life, from boat parties to sunny afternoons relaxing on the poolside it soon racked up quite a following. But upon closer inspection an unsettling pattern starts to emerge, in each of the images posted “Louise” is seen holding some sort of alcoholic drink.

In a week that started with Martin Luther King day and ended with the highly divisive inauguration of Donald Trump as president of the United States, Black lives Matter launched a new web app – an inverted version of Facebook’s “Mark yourself safe” feature was created to highlight the levels of fear felt within the black community and the racism they face on a day to day basis.
Warning this video contains unsettling images.

Started by an offhand remark by a fan on social media Netflix recognised the potential of their hit show Narcos to teach its audience Spanish. Delivered by some of the stars of the show several episodes were uploaded breaking down phonetically certain words and sentences common to the show. Mainly this involved slightly bluer phrases such as “malditos Malparidos” which if you would like to know the meaning of you can watch the case video below.

Another piece of great reactive PR came from IKEA who noticed that the latest and very expensive Balenciaga bag bore an uncanny resemblance to their much, much cheaper and incredibly practical Frakta bag. With a gloriously tongue in cheek tone they responded in most fashionable way possible with a guide on how identify a genuine original Frakta bag. 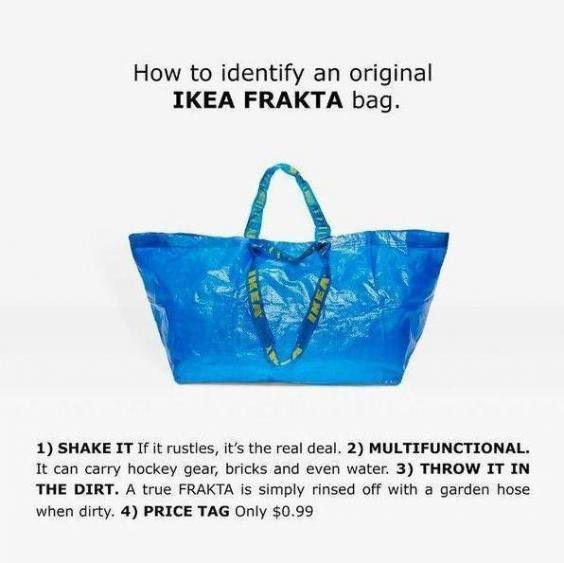 In response to the Spanish Government charging 21% VAT to cinema goers but only 10% to those viewing stage plays Texas Cinemes decided to stage a play within a screening and refund their audience the difference. As a result more than 120,000 signatures were collected for the cause.

It all started with a tweet from Carter Wilkerson asking what it would take to get free chicken nuggets and the benchmark set by Wendy’s of 18 million that set off this epic campaign which came to be known as Nuggs for Carter. With huge brands such as Apple and Microsoft lending their support to the underdog Carter the real winner was Wendy’s who saw their social media engagement and publicity soar in the fallout of the teen’s tweet.

.@carterjwm is now the most retweeted tweet of all-time. That’s good for the nuggets, and $100k to @DTFA. Consider it done. #nuggsforcarter pic.twitter.com/k6uhsJiP4E

The most listened to music in Brazil is not Samba or Bossa Nova as you might think, instead it is the ear-worm inducing tones of the on hold themes used by major corporations with many callers spending over 30 minutes being driven to insanity by the sheer monotony. To pay some of these companies back Grey Brazil enlisted the help of some of the biggest names in Spanish music to blast live version of these tunes outside the offices, turning the tables and giving them a taste of their own medicine.

Off the back of former President Barack Obama’s comment that he was hoping for a job at Spotify after leaving his post the company put a specialised job posting up online seeking a “President of Playlists” with the criteria paying tribute to Mr Obama and highlighting many of the great achievements he has accomplished.

Hey @BarackObama, I heard you were interested in a role at Spotify. Have you seen this one? https://t.co/iragpCowpO

To encourage inclusion and an understanding of the blind in young children The Dorina Nowill Foundation of the Blind has created Braille Bricks. These small bricks make up a full braille alphabet to help facilitate the acquisition of literacy skills in the visually impaired all the while creating a fun educational and inclusive activity for all.

[LEW’LARA \ TBWA BRAZIL for Dorina Nowill Foundation for the Blind]

Thanks to Russia’s laws it is becoming increasingly difficult and dangerous for open protests especially regarding LGBT issues. To get around this SSEX BBOX held a virtual protest in possibly the most political places in Russia, the Kremlin. Thousands photographed images of same-sex love and geo-tagged their location to the site of the Kremlin. During the week of the protest instead of images of the building tourists using Instagram saw thousands of images of kisses from all over the globe.

Transplantation is always a sensitive subject, especially with children. With an international shortage, particularly evident in Japan the Green Ribbon Project Committee set out to destigmatise and raise awareness of this growing issue. Taking well-loved toys with missing or broken limbs they created a toy translation service in which unwanted toys were donated and used to repair the beloved play things. In return the receiver would send a personal letter of thanks to their donor directly rewarding them for their kind actions.

The app Woman Interrupted was created to coincide with International Women’s day and tracks how often in a conversation a woman is interrupted by a man. It was conceived in the wake of the Hilary x Trump campaign which saw Mr Trump repeatedly interrupting his opponent.

On Boxing Day last year Burger King unveiled their answer on what to do with unwanted Christmas gifts. The first 500 people to turn up to the Leicester Square branch were given the opportunity to swap their unwelcome presents for a Whopper with all accepted gifts donated to charity.

Two statistics mirrored each other last year, as the number of people offering spare rooms and properties on Airbnb doubled so too did the number of homeless from 2600 to 5400 in Brussels along. Thus the notion of notfairbnb was born – on the surface it is a carbon copy of the traditional Airbnb website but instead of fancy penthouses and traditional terraced home it shows real areas around the city where the homeless are forced to sleep.

Building on the company’s message of “you’re not you when you’re hungry” the Hungerithm was developed, an algorithm that monitors the general sentiment of the internet. Simply put, the angrier the internet gets, the lower the price of a Snickers bar in participating 7-Eleven stores.

Clickbait material is everywhere, so the Wild Detectives decided to produce some of their own for the greater good. Stories started appearing across their social media subtly describing the plots of famous novels disguised as news stories with a traditionally sensational clickbait style title. If someone was to follow the link they would be directed to a web page with full digital access of the novel for them to read.

[DIESTE USA for The Wild Detectives]

In “Get the Flow” Vodafone explores the power of hip hop on people suffering with a stutter and follows the story of Mitch as he works on an interactive app for the company allowing stutters around the word to use rap to improve their fluency.

OK Go are renowned for their intricately choreographed music videos with many being a viral sensation and their video for The One Moment was no different. It features a number of spectacularly fleeting practical effects exploding, popping and booming around the musical members with some very subtle product placement from Morton Salt in the background. The partnership was created to launch Morton Salt’s Walk her walk campaign, with the popularity of the video it catapulted the brand’s key messaging into a trending topic on twitter and vastly increasing brand awareness.

The creative idea behind the campaign Talk to Me stemmed from research into the positive effects familial voices can make on comatose patients, however due to restrictions on visiting times alongside the pressures of work and travel implications bed side conversations are not always possible. Thus Panasonic devised a working one way phone line installed on special retractable arms and positioned to the sides of the patient’s bed so friends and family could call at any time and hopefully help to facilitate a speedier recovery.

With sentiments towards pre-packaged treats becoming increasingly negative in a growing health conscious world Ferrero called upon some of the harshest critics to assess their products… Grandmas. They were invited down to the factory with more than 6 million following their adventures online resulting in a mass amelioration of brand sentiment and over 82% likability across social platforms.