Young Apprentice returns to BBC ONE.

LONDON, Tuesday 18th October 2011: Following the huge success of the first series Lord Sugar returns with his search for a Young Apprentice, on BBC One this autumn.

An avid supporter of young people in business, Lord Sugar will offer twelve of the UK’s most promising and ambitious teenagers the opportunity of a lifetime; a chance to follow in his entrepreneurial footsteps by competing for the title of Young Apprentice. 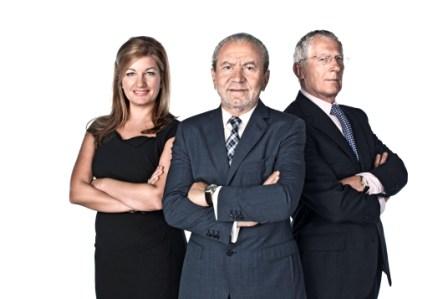 For eight weeks from 9pm on Monday 24th October, twelve young candidates will make the leap from classroom to boardroom and face an education like no other as they embark on a series of tough tasks, pushing their skills to the limit. The young candidates will face the same cut-throat competition as in the adult series – it’s survival of the fittest as the tasks become more challenging.

From all corners of the UK, each of the aspiring moguls have been selected for their academic flair and burning passion for business – Lord Sugar has spotted something in all of them, but only one can succeed in becoming the next Young Apprentice.

Aged across 16 and 17 years old, most of these tycoons of tomorrow are still in education and span a broad range of backgrounds from council estates to private schools; they include an award-winning fashion designer, a young farmer, a published author, a filmmaker, a keen horticulturalist, a photographer and a former head-girl.

Lord Sugar started in business at the same age and expects his prospects to be able to do the same.  They believe that they have the capability, passion and raw business talent to take on the challenge and be the one to win access to a fund worth £25,000. The fund will go towards kick-starting his or her business career, and will be tailored to their individual career prospects and development.

All think they have what it takes, but can they prove themselves when the pressure is on? Lord Sugar warns them: “You are young, don’t try and pretend like you know it all because believe me it’ll be embarrassing.” With tasks including making and selling ice cream, launching a new brand of deodorant and creating an online video game, the candidates will quickly learn that Lord Sugar doesn’t hang about when it comes to separating the wheat from the chaff.

Lord Sugar is, once again, aided by his no-nonsense advisers Nick Hewer and Karren Brady who will scrutinise the candidates’ every move during the weekly tasks.

They will live in a luxurious townhouse in St John’s Wood, North London, giving them a taste of the lavish lives they dream of. For some, it’s their first time away from home, but for all it’s the chance to experience what life could be like as a high flyer. When the winner is crowned they will be given a once-in-a-lifetime opportunity to be mentored by Britain’s most famous boss.

Published author and rounders champion, Elizabeth “Lizzie” Magee’s first job was collecting glasses in a pub. She now has her own business designing personalised guitar straps and also breeds Jack Russell Terriers. A gym fanatic, she describes herself as impatient and a “time freak.”

She says: “I’m very, very determined and if I know how to get something I will get it.”

Gbemi Okunlola
Age: 16
Education: Studying for a Fashion and Design Advanced BTEC and an A Level in Business Studies
Lives: London

Award winning fashion designer Gbemi has already started her own clothing line and is involved in both designing and making the clothes. Listing Louis Vuitton as her inspiration, Gbemi describes herself as a ‘diva’ and feels her strength is that she always works to her full potential.

She says: “if I believe that what I’m saying is right I will argue until my full voice and my full opinion is heard.”

Female footballer Hannah has made money re-selling vintage clothes and creating school leavers’ hoodies. She plays for two football teams and also enjoys architecture, hoping to get involved in property management in the future.

She says: “I want to show that you can succeed in the business field, without relying on numerous qualifications. The right mind and attitude is ultimately a much more important quality than 12 A*s”

Born in Iraq, Haya moved to England with her family at the age of 6. A self-proclaimed bossy-boots who is determined to succeed in business, she is also a keen eBay trader and wishes she was the brains behind MAC cosmetics.

She says: “I have a big ego… I want to be known as Haya Al Dlame, the next deserving winner of Young Apprentice. “

Ambitious former Head Girl Hayley says her “life revolves around order.” A farmer’s daughter and member of Young Farmers herself, she passionately disagrees with people claiming benefits when they could be working. Inspired by drinks company Innocent, she sells free range, organic eggs from her own chickens.

She says: “I wear wellies, and I am not afraid to muck in”

Film enthusiast Zara used to be a baby model and won a sock design competition when she was seven years old. She is inspired by Katherine Bigelow, the first female director to win an Oscar and currently produces films for charities. When she’s not making movies, Zara enjoys running and playing table tennis.

She says: “Dreamers dream; people who achieve wake up, get out there and start doing stuff to make their dreams happen.”

A keen horticulturalist, Ben started a gardening business in his local area in 2008. He is involved in social enterprise projects providing voluntary services to the allotment association, having taken on his own allotment at a young age. In the future he hopes to help those with learning and behavioural problems study horticulture and agriculture.

He says: “I am an ordinary lad who wants to do the best not just for myself but for everyone.”

Keen rugby player and scuba diver Harry also has an artistic side, and runs his own photography business. He has been working since he was nine, with jobs including gardening, selling at car boot sales and magazine delivery. He wishes he had invented the Cat’s Eye road marker.

He says: “I aim high. I don’t aim low ever, what are you ever going to gain from that? I aim high and I get there because of that determination, because I’m pretty ruthless in how I get there.”

Harry Maxwell
Age: 16
Education: Studying for Pre-Us in Maths and Further Maths and A Levels in Geography and Economics and the Extended Project
Lives: Oxfordshire

School prefect Harry is a polo enthusiast and water-sports fanatic, as well as a talented singer and pianist. Inspired by Simon Cowell, entrepreneur Harry is a business veteran despite his young age. Starting his first business when he was ten, selling tickets on the internet, he has already started three successful businesses, encompassing travel, marketing, property and cosmetics.

He says: “In terms of my intellect, self-motivation, confidence, and business instinct for my age, I am unrivalled. I have a pure entrepreneurial gift waiting to be unleashed and harnessed”.

Irishman James describes himself as a risk-taker and always follows his gut instinct. James got the joint highest score in GCSE Economics in Northern Ireland and feels he is a natural businessman. He is a massive football fan and lists his passion as economics.

He says: “I have integrity, but when winning gets in the way of integrity, integrity goes out the window.”

Describing himself as ‘confident, charismatic and clever’, Lewis Roman’s first foray into the business world was as an assistant stylist at a hair salon. A keen shopper and gym buff, Lewis now works in the food industry and hopes to change the world of business forever.

He says: “I’m not arrogant or backstabbing, I’m just a really great guy.”

A keen inventor and fundraiser who describes himself as “competitive and charismatic,” Mahamed who is the Youth Parliament Representative for his borough, has already made money buying and selling TV satellites. Inspired by the Microsoft and Facebook brands, he hopes to bring about “monumental change” using politics and youth outreach schemes.

He says: “I have so many abilities and so many talents. I want to prove what an entrepreneurial person I am.”