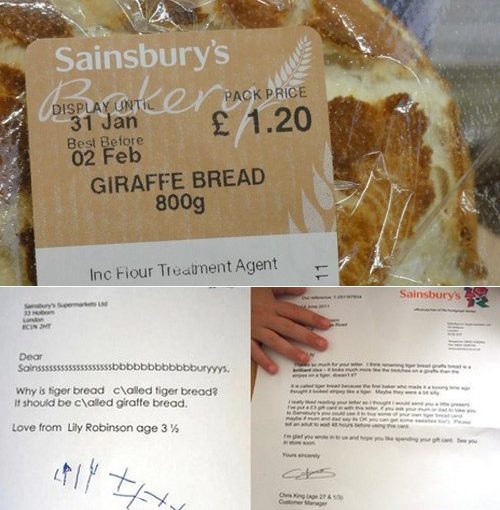 Sainsbury’s is renaming its tiger bread after a letter a three-year-old girl wrote to the company, saying the bread looked more like a giraffe, went viral, reports the BBC.

In May 2011, Lily Robinson wrote to the supermarket, suggesting that the bread should be called giraffe bread and received a letter back saying that renaming it was “a brilliant idea”.

Her mother posted the letters on her blog after it again became a topic of conversation on social media sites last week.

Chris King from the Sainsbury’s customer services team wrote back: “I think renaming tiger bread giraffe bread is a brilliant idea – it looks much more like the blotches on a giraffe than the stripes on a tiger, doesn’t it?”

A Sainsbury’s statement said; “In response to overwhelming customer feedback that our tiger bread has more resemblance to a giraffe, from today we will be changing our tiger bread to giraffe bread.”