► Physics genius solves the greatest mysteries of the cosmos yet. Why have England failed to win a World Cup since 1966? And what are the optimum conditions needed for England to succeed in Brazil?
► Shirt colour, team formation and nationality of referee can all affect the outcome according to new study commissioned by Paddy Power
► “General Logistic Regression Modelling” is used to enable England to win a penalty shootout

After cracking the innermost secrets of the cosmos, Britain’s greatest scientific mind has turned his attention to an even greater conundrum – how can England win the World Cup?

Professor Stephen Hawking was commissioned by Paddy Power to lead an exclusive, month long study into the science of England’s World Cup performances and the results pinpoint the ideal conditions for World Cup success and the best way to take a penalty. 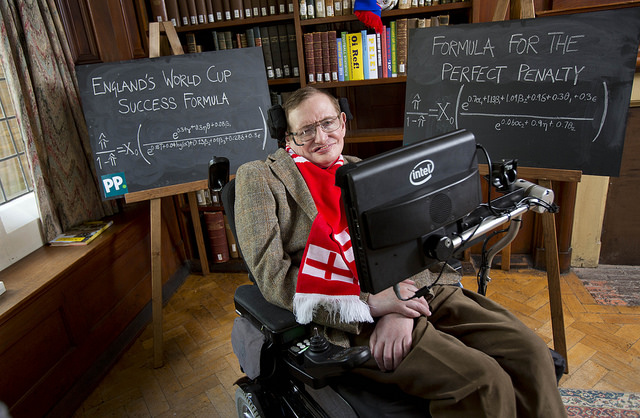 Paddy Power engaged the mathematical genius and theoretical physicist to analyse the key factors which have affected England’s World Cup performances in their 45 finals games since 1966. The resulting scientific model was then used to help predict the probability of England winning key matches in Brazil this summer.

Among the variables analysed by Professor Hawking and his team, those that had an effect on the probability of England winning a match were found to be the stadium temperature, the stadium altitude, the nationality of the referee, the colour of the team’s shirt and the team formation.

• Temperature: Temperate climates are best. A 5⁰C rise in temperature is expected to reduce England’s chances of winning by 59%.
• Altitude: England are twice as likely to win when playing below 500m above sea level.
• Distance from home: England are 22% more likely to win when travelling short haul. Cultural differences and jet lag take their toll.
• Kick-off: England are creatures of habit and their chances of winning could improve by a third when starting at 15.00 local time. The evening kick-off against Italy is bad news.
• Formation: A confident 4-3-3 has a success rate of 58% compared to 48% when playing 4-4-2.
• Shirt colour: Wear red. England’s success rate has been 20% higher in coloured shirts. Red makes teams feel more confident and can lead them to being perceived as more aggressive and dominant.
• Nationality of referee: European referees give England the best chance of success. 63% of games are won with a European referee compared to 38% when the referee is from elsewhere.

The chances of England’s success therefore are represented by the following equation: 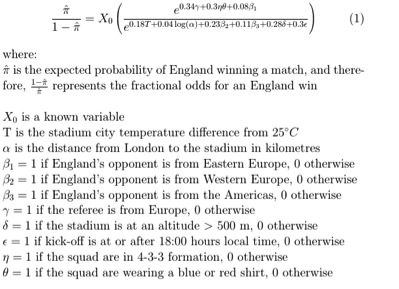 Professor Stephen Hawking commented; ‘Ever since the dawn of civilization, people have not been content to see events as unconnected and inexplicable. They have craved an understanding of the underlying order in the world. The World Cup is no different. Paddy Power recognise that as a theoretical physicist I’m marginally more qualified to make predictions than Paul the Octopus. Using data going back as far as the 1966 World Cup, I have endeavoured to answer two of the biggest questions in sport; what are the optimal conditions for England success? And, how do you score in a penalty shootout? To bring WAGs or not to bring WAGs, that is not the question. This will have no bearing on England bringing home the bacon, rather England’s likely success can be worked out by looking at a number of environmental, physiological, psychological, political and tactical variables. It is hugely complicated. In fact, compared to football I think Quantum Physics is relatively straightforward.’

Paddy Power commented; ‘The modern game is so full of statistical analysis that for us it was a no brainer to call on Professor Hawking to give England some help. Let’s hope that Roy Hodgson takes note of the findings to give England the best possible chance of getting all the way to the final. It’s not too late for Roy to add the professor to his backroom staff. Imagine the professor’s halftime speech in the dressing should England find themselves trailing Italy.’ 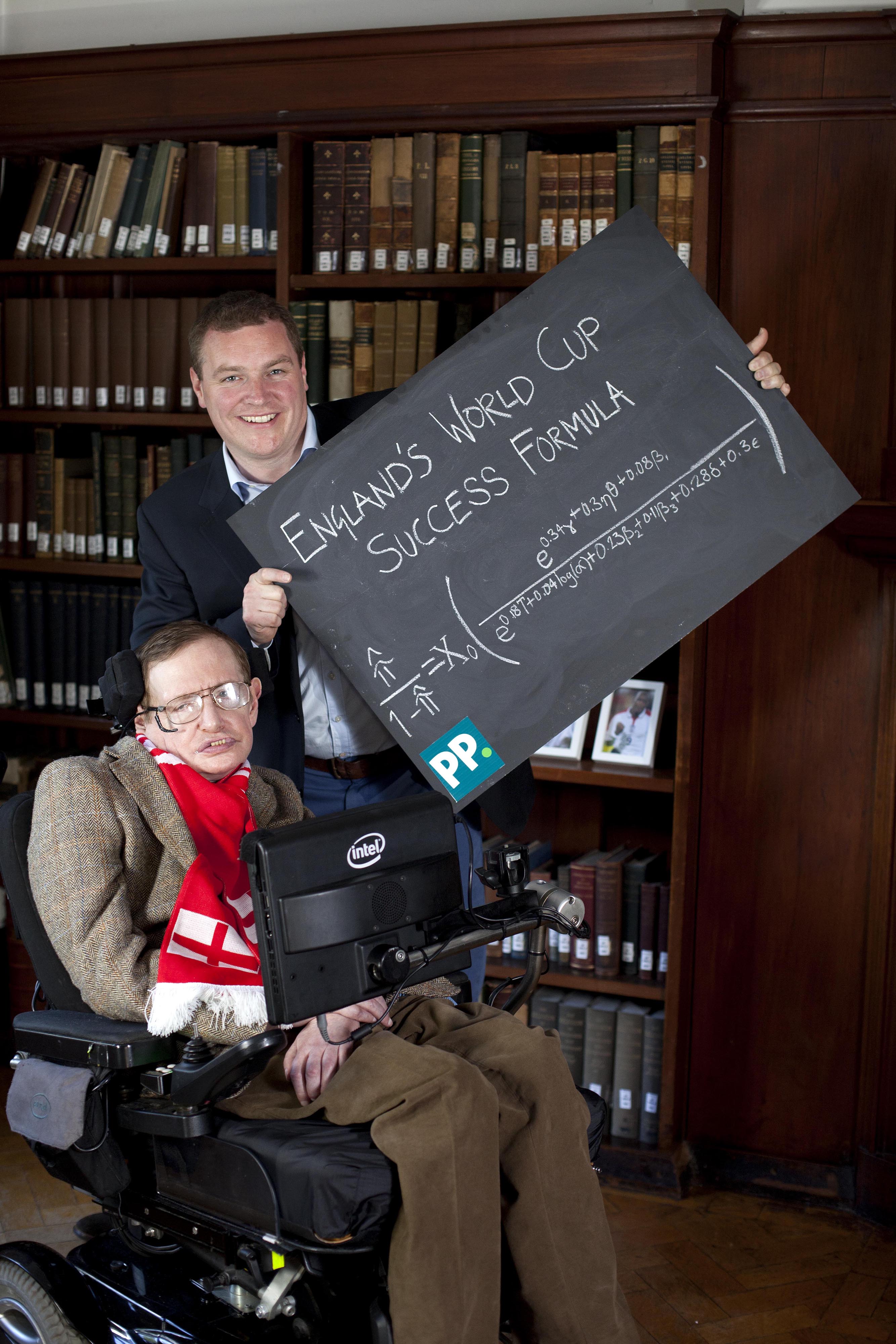 Want to win a penalty shoot-out? Line up your blondest players…

The second part of Professor Stephen Hawking’s study looked closely at the conditions for scoring the perfect penalty where data from the total of 204 penalties taken during all 22 World Cup final penalty shootouts was analysed.

The variables that were found to affect the probability of a player scoring a penalty during a shootout were the player’s position, the length of run-up, where on the boot the ball was kicked from, the player’s hair type and where the ball was aimed.

• Player position: Forwards have the best scoring record for penalty shootouts at 81%, but their teammates aren’t too far behind with midfielders scoring 67% and defenders scoring 65%.
• Player’s hair type: Blondes and baldies have more fun. Fair-haired and balding players have a success rate of 84% and 71% compared to darker haired player who have 69% success.
• Run up: Give it some welly! There is only a 58% probability of scoring if your run-up is three steps or under.
• Side footed: Place the ball with the side foot and you are 10% more likely to score than if you whack it with your laces.
• Aim: 84% of penalties in the top corner go in. The highest percentage of any area.
• Goalkeepers: They are 18% more likely to save the ball if they move from side to side.

The perfect penalty can be summarised as: 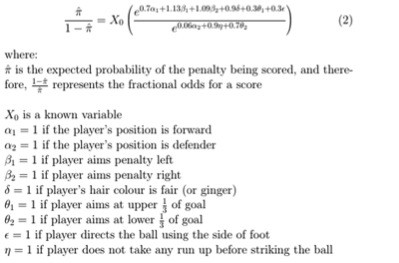 The full report is available on request.
Video presentation is also available.