That is the message from Paddy Power as it sent its record breaking vuvuzela truck onto the streets of the capital this morning to put the wind up the Swedes. 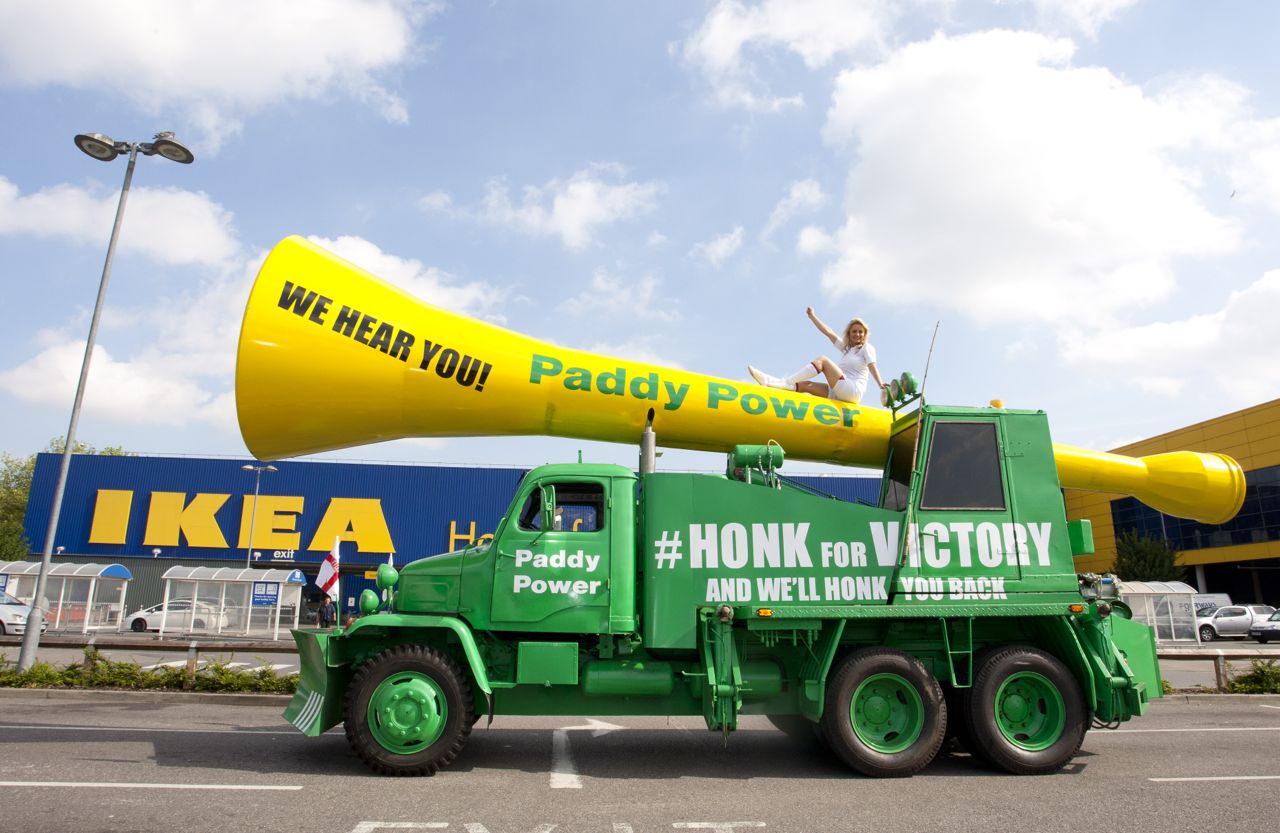 With Roy Hodgson’s team securing A REASONABLY RESPECTABLE DRAW in their first match against the much-fancied, potentially world beating moody French, the bookmaker is calling for English fans to cast off their Euros 2012 indifference and support England by following the Paddy Power Vuvuzela truck around London tomorrow (see schedule below) or by following the Twitter conversation #HONKforVICTORY! 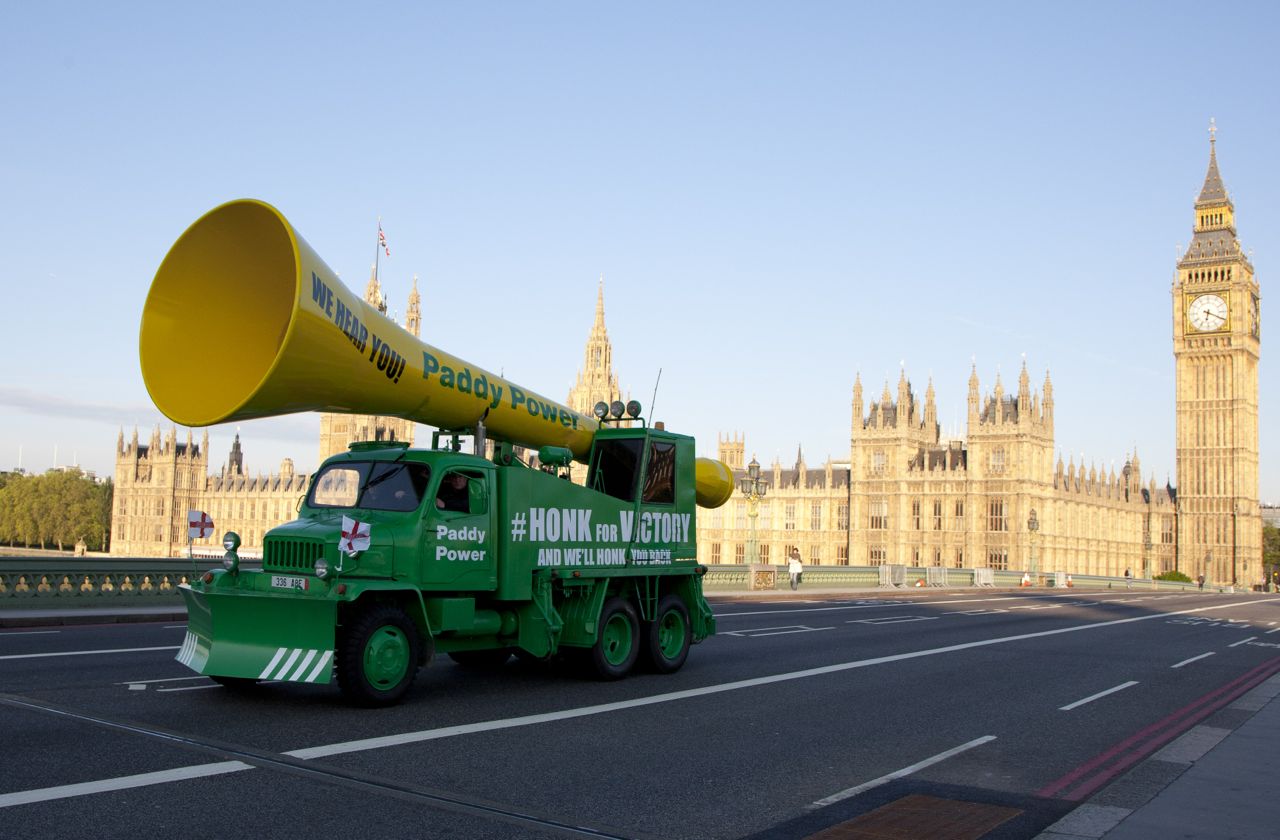 An England win against Sweden will all but guarantee a place in the quarter-finals. And after that, who could bet against a Wayne Rooney inspired run to the final? To help make this happen, Paddy Power’s giant vuvuzela took to the streets of London today to DRONE up some football fervour at well known sites of Swedish influence. 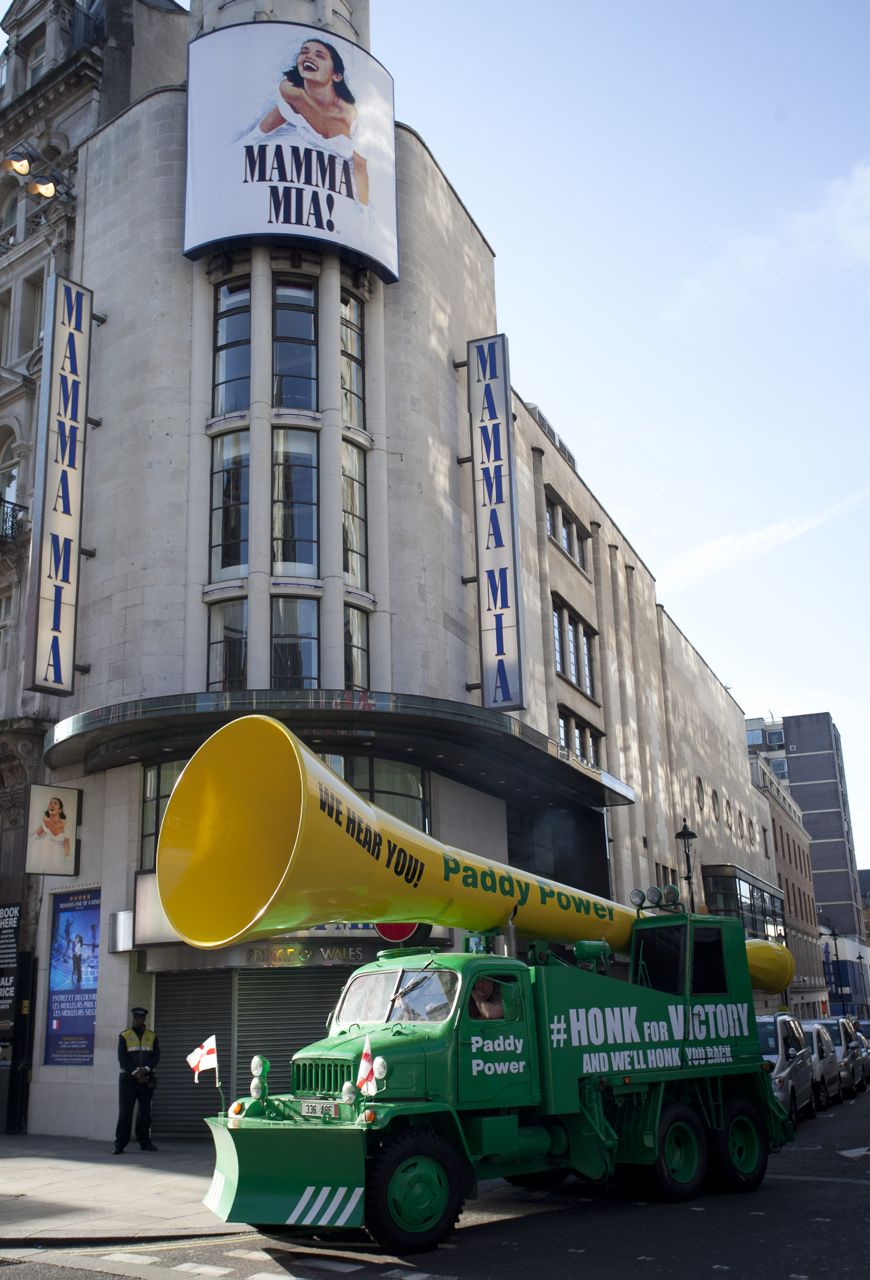 The nine metre long vuvuzela honked for victory at the following Swedish hotspots:

• Ikea: ‘We’ll send those Swedish flatpacks packing’.
• Mamma Mia: ‘The goal is to drown out those darn catchy Swedish Abba pop songs in London’s West End.’
• The Swedish Embassy: ‘They’ll be searching for the ear plugs when they hear our diplomatic mission.’

UEFA controversially banned the vuvuzela from stadiums in Poland and the Ukraine during the Euros – following their widespread use at the World Cup in South Africa in 2010 where they were almost universally condemned as “bloody annoying”.

At nine metres in length with a trumpet two metres across Paddy Power’s We Hear You vuvuzela is the largest ever constructed (and therefore, the most “bloody annoying”). The bespoke build took a team of mechanics three months to make and involved a hell of a lot of BZZZZzzzzzzzzz.

While the Paddy Power vuvuzela can generate 138 decibels of noise, that won’t be anything compared to the cheer when England wins on Friday.

The monster truck will be back at it again tomorrow (Friday) when it will be honking for victory at the following hotspots:

The Vuvuzela truck is the latest in a series of Paddy Power ambushes on the Euros, which has included a giant 100ft Roy the Redeemer statue erected on the White Cliffs of Dover and Nicklas Bendtner’s Paddy Power pants.

The Arsenal player revealed his branded underwear as part of his equaliser goal celebration in last night’s Denmark vs Portugal match.

Paddy Power is Ireland’s largest bookmaker and a leading provider of gaming services in the UK, Australia, Italy, France, Canada and Ireland.  Founded in 1988 Paddy Power is a publicly quoted company and is listed on both the Irish and London Stock Exchanges (www.paddypowerplc.com).