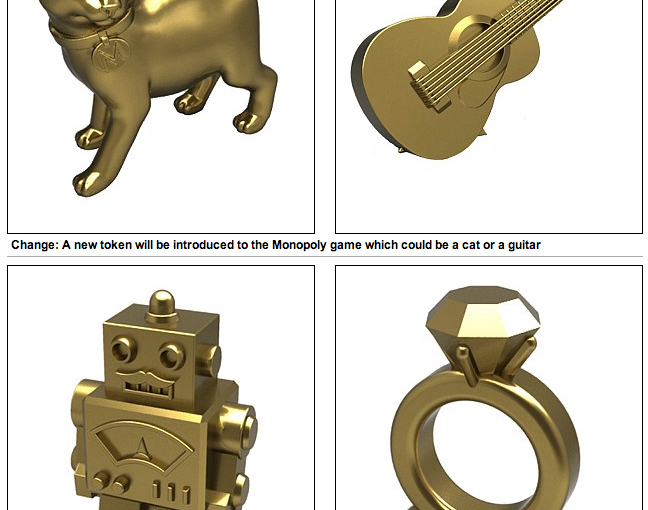 Monopoly maker Hasbro is holding a Facebook contest to eliminate one of their eight classic tokens that identify the players and introduce a new one.

It’s the latest effort by the toymaker to jazz up the game which debuted almost eight decades ago. In recent years Hasbro introduced a version that replaces paper money with an electronic bank and another that incorporates an iPad.

Up for elimination: all eight current tokens including a battleship, iron, racecar, Scottie dog, shoe, thimble, top hat and wheelbarrow.

Most tokens were introduced with the first Parker Brothers iteration of the game in 1935, and the Scottie dog and wheelbarrow were added in the early 1950s.

Eric Nyman, global brand leader for Hasbro gaming, told News Day that the impetus for the contest came from chatter on Facebook, where Monopoly has over 10 million fans.

“We’re constantly interacting with those fans and we’re always getting suggestions from fans about what tokens they would love to see,” Nyman said. They took five of the top suggestions from Facebook for the contest.

If the January blues are proving too much, then maybe a career change is in order.

The tester will be paid for the privilege – £20,000 for the six-month contract.

The Daily Mirror reports that the position will see the successful applicant travelling to 20 Splash World resorts in countries such as Turkey and Europe.

Applications will be processed via the First Choice Facebook page.