The new Doctor Who. 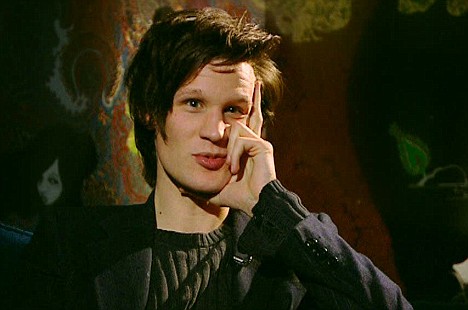 the new doctor who

The BBC has announced that Matt Smith has been cast in the role of the Doctor in the iconic BBC series Doctor Who.

Smith will be the 11th Time Lord and will take over from David Tennant who leaves the show at the end of 2009. He will be seen in the forthcoming fifth series that will be broadcast in 2010.

The fifth series will also have a new lead writer and Executive Producer in the form of the BAFTA award-winning writer Steven Moffat, who is taking over from Russell T Davies.

Moffat will be joined by Piers Wenger, who will be the new Executive Producer for BBC Wales making the show.

Following David Tennant’s decision to step down at the end of 2009, the team behind the new series set about casting the new Doctor so that new adventures could be created and scripts written with Matt in mind.

The identity of the new Doctor was revealed on a special edition of Doctor Who Confidential.

In it Smith revealed his initial reaction at taking on such a legendary role and his thoughts on what direction the Doctor might now be going with him playing the part.

Matt Smith said of his new role: “I’m just so excited about the journey that is in front of me. It’s a wonderful privilege and challenge that I hope I will thrive on.

“I feel proud and honoured to have been given this opportunity to join a team of people that has worked so tirelessly to make the show so thrilling.

“David Tennant has made the role his own, brilliantly, with grace, talent and persistent dedication. I hope to learn from the standards set by him.

“The challenge for me is to do justice to the show’s illustrious past, my predecessors, and most importantly, to those who watch it. I really cannot wait.”

Lead writer and Executive Producer Steven Moffat said: “The Doctor is a very special part, and it takes a very special actor to play him. You need to be old and young at the same time, a boffin and an action hero, a cheeky schoolboy and the wise old man of the universe.

“As soon as Matt walked through the door, and blew us away with a bold and brand new take on the Time Lord, we knew we had our man.

“2010 is a long time away but rest assured the 11th Doctor is coming – and the universe has never been so safe.”

Piers Wenger, Head Of Drama, BBC Wales, added: “With two hearts, a ferocious mind and over 900 years of experience behind him, it’s not every 26 year old actor who can take on a role like the Doctor but within moments of meeting Matt he showed the skill and imagination needed to create a Doctor all of his own.

“It’s just the beginning of the journey for Matt but with Steven Moffat’s scripts and the expertise of the production team in Cardiff behind him, there is no one more perfect than him to be taking the TARDIS to exciting new futures when the series returns in 2010.”

Ben Stephenson, Controller, BBC Drama, added: “I am delighted to see Matt take on this iconic role. It will see him continuing his relationship with the BBC following his performances in Ruby In The Smoke and Party Animals, and his upcoming role in Moses Jones.

“The combination of Matt, Steven and Piers will, I know, take Doctor Who onto new and even dizzier heights.”

Jay Hunt, Controller, BBC One, said: “Matt Smith will be a mesmerising 11th Time Lord, true to the spirit of the show.

“He is a worthy successor to David Tennant who has been utterly remarkable in the role and promises to continue to be in next year’s four special episodes.”

Doctor Who Confidential – The Eleventh Doctor can be seen on BBC iPlayer until 10 January 2009.

There will be four Doctor Who specials featuring David Tennant that will run in 2009 into New Year 2010 (dates to be confirmed).

An extended interview with Matt Smith can be seen at bbc.co.uk/doctorwho

Matt Smith, 26, grew up with his family including one sister in Northampton. He was head boy at Northampton School For Boys where he excelled at sports, music and drama. Initially, Matt wanted to be a professional footballer and played for Northampton Town Under-11 & 12s, Nottingham Forest Under 12, 13 & 14s and Leicester City Under 15 & 16s before a back injury forced him out of the game. Following his injury, and with the encouragement of one of his teachers, Jerry Hardingham, Matt decided to join the National Youth Theatre. It was during this time that Matt first gained attention at the Royal Court Theatre when he was cast in the play Fresh Kills, directed by Wilson Milam, whilst still at the University Of East Anglia where he was studying Drama and Creative Writing. Already a stalwart of the National Youth Theatre, his performance at the Court led to a variety of theatrical experiences at the National Theatre: in the award-winning History Boys (directed by Nick Hytner), On The Shore Of The Wide World (directed by Sarah Frankcom) and also in the acclaimed trio of plays Burn / Citizenship / Chatroom (directed by Anna Mackmin). These pieces were followed by the lead role of Danny in the BBC Two series Party Animals, the brilliantly observed drama set in the world of young politicians. In a dazzling return to the Royal Court in 2007, Matt played Henry in Polly Stenham’s award-winning first play That Face, opposite Lindsay Duncan. His performance gained Matt an Evening Standard Best Newcomer nomination and a year later the play had a second life in the West End at the Duke of York’s Theatre. In between the two runs, Matt played Guy opposite Christian Slater’s Buddy in Swimming With Sharks, Mike Leslie’s searing West End adaptation of the 1994 Hollywood film. In this time he also played a lead role in the BAFTA winning BBC One series The Street, opposite Gina McKee and Lorraine Ashbourne. Matt has recently completed work on Moses Jones for BBC Two, directed by Michael Offer, in which he plays the lead role of Dan Twentyman, alongside Shaun Parkes in the title role. These roles led to Matt’s first outings on the small screen, alongside Billie Piper in Phillip Pullman’s period detective stories, The Ruby In The Smoke and The Shadow In The North (both BBC One), where he played Jim, right-hand man to Billie’s detective heroine Sally Lockhart.

The Muscles from Brussels is back!