LOCOG Back Down On Paddy Power Poster Campaign.

In what must be deemed a gold medal winning U-turn, London 2012 organisers, LOCOG, have reversed their position from yesterday which demanded the removal of Paddy Power’s latest advertising campaign from poster sites around the Olympic City.

The billboards in question were erected to promote the bookmaker’s sponsorship of an elite athletics event featuring an egg and spoon race that is scheduled to take place in the picturesque town of London, France on 01 August 2012 and is part of the bookmaker’s on-going “We Hear You” marketing campaign.

Coincidentally today’s change of heart by LOCOG, which was communicated by their law firm Freshfields was taken just moments before Paddy Power’s law firm, Charles Russell, were set to enter the High Court in London seeking a court order against the Olympic organisers.

The legal ruling was sought by Paddy Power on the grounds that their campaign does not breach LOCOG legislation on advertising around the 2012 Games.

Over the past 24 hours, tens of thousands of Paddy Power fans turned to social media to show their support for the ad campaign and to vent their anger at LOCOG’s decision, resulting in the bookmaker trending on Twitter in the UK earlier today.

Paddy Power have confirmed that they will be seeking to recoup their legal costs from LOCOG and if successful will donate the full amount to grassroots sports initiatives across the UK.

A spokesperson from Paddy Power said “This is a victory for common sense and for each and every one of our customers and fans who supported us along the way.  The athletes of London, France will be breathing a collective sigh of relief this afternoon. May the Games begin!”

Paddy Power is Ireland’s largest bookmaker and a leading provider of gaming services in the UK, Australia, France, Canada, Italy and Ireland. Founded in 1988 Paddy Power is a publicly quoted company and is listed on both the Irish and London Stock Exchanges (www.paddypowerplc.com)

Read more about the event here 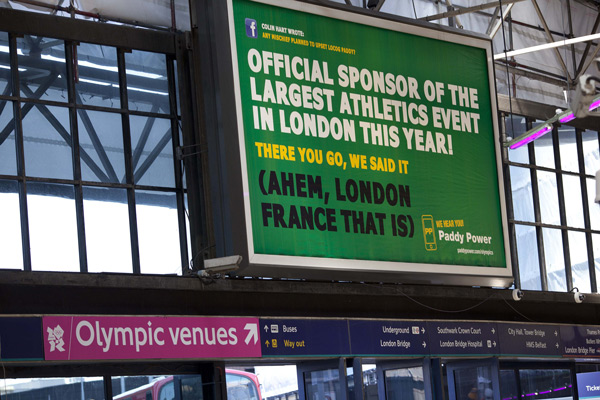 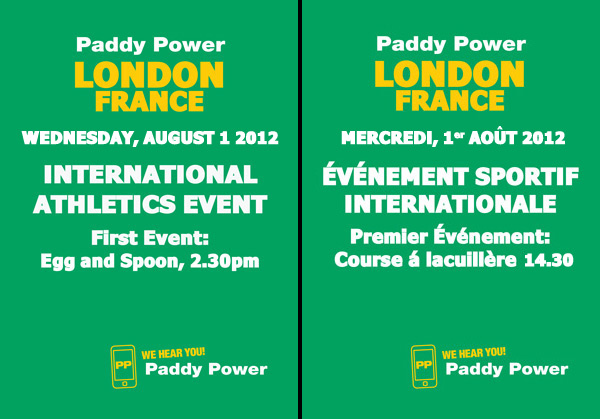