LONDON, Friday 12th August 2011: Red Squirrels, Scottish Wildcats and Hedgehogs are amongst the native UK species that are most at risk of extinction within the next 40 years. That’s the verdict of a comprehensive new study on the indigenous species that have witnessed the biggest decline in population numbers over the last century – a study which suggests that some native UK species could soon become a footnote in natural history. 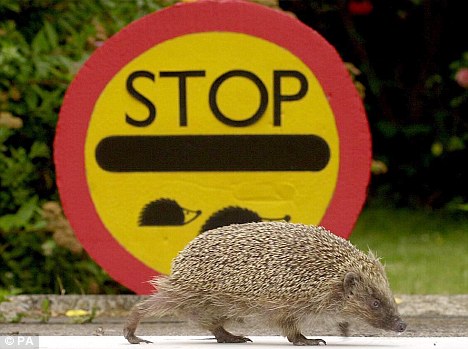 The ‘Eden Species Report’ was specially commissioned by the UK’s leading natural history channel Eden. The research team, led by conservationist Doctor Toni Bunnell, from the University of Hull (lecturer retired), brought together all the available research and officially recorded sightings of numerous UK based species, including birds and mammals. The desk-based research was supplemented by expert opinion from wildlife specialists, conservation organisations and monitoring schemes to provide a compelling overview of UK-based wildlife most at risk.

The study, which looked at the reasons for each species’ deterioration, as well as the estimated rate of decline and the recent population statistics, notes that two bird species are most at risk. The Red-Necked Phalarope is down to a dismal 36 breeding pairs in the UK, mostly on Fetlar, Shetland with a few dozen sighted elsewhere on autumn migration each year. Likewise, the Black-Tailed Godwit has seen a 33% decline in the past 15 years alone and is most at threat due to habitat loss.

The Turtle Dove has also suffered one of the most precipitous rates of decline in recent years. The migratory species which spends summer in Europe has witnessed a reduction in numbers of 90% in the UK since 1971. The study pinpointed hunting and fluctuating cereal crops in Africa during the species’ winter migration as the biggest reason for its decline.

The study notes that other animals have suffered due to changes closer to home. The number of Scottish Wildcats has dwindled alarmingly in recent years due to loss of habitat and cross breeding with domestic cats. Similarly, the Capercaillie also known as the Woodland Grouse, has seen numbers decline greatly due to deer fencing, predation and lack of suitable habitat.

The ‘Eden Species Report’ notes the ten most endangered UK species (for which population numbers are available) as follows:

10 species in danger of extinction in the UK today

The study suggests that Red Squirrels are unlikely to exist in the UK 20 years from now.  The species is currently almost extinct in England with only a few thousand remaining in Wales.  Largely confined to Scotland and Ireland, the Red Squirrel faces competition from the introduced, more adaptable North American Grey Squirrels.  As their main habitat is coniferous forests, increasing the planting of large coniferous forests is an important factor in helping them to thrive.

The Natterjack Toad is named as the UK’s most endangered amphibious species with only 2,500 breeding females now resident in the UK, and in severe danger of disappearing from our waters due to a combination of factors including sea-level rises.

The study notes that while reliable population figures for many water-based species are unavailable, credible individual population studies suggest that numerous native species are also under threat of extinction. These include the Gwyniad – a type of fish found only in two lakes in North Wales – have suffered a reduction in numbers due to the introduction of invasive species and a decline in water quality.

The Leatherback Turtle is another species at risk with the two biggest threats to their existence being egg harvesting and being caught in fishing nets. The report notes that there are only 20-30,000 adult females worldwide – a 70% decline in numbers over last 20 years alone.

Similarly, the White Clawed Crayfish – our only native freshwater crayfish – traditionally found in fresh water streams all across the UK, are now absent from many British counties altogether due to the omnipresence of the predatory Signal Crayfish originating from the USA.  The study notes the species decline is estimated at 50-80% in the last ten years alone. The Common Skate and The Angel Shark were also highlighted as suffering from severe decline in recent years, largely due to trawl fishing techniques.

While the study points to species most at risk, the research team note that re-introductions have helped a number of species to recover; including the Red Kite, which now thrives in the Chilterns and elsewhere, and the Otter, which has experienced a reversal of fortunes in recent years with improved river water quality as well as breeding programmes and releases to re-establish the species in key areas. The Great Bustard has also been re-introduced to the UK, to Salisbury Plain, as well as the White-tailed Eagle, a species that was previously successfully re-introduced to Scotland.

UKTV’s General Manager of Factual, Adrian Wills, states “Our natural wildlife is suffering from habitat loss, flooding, climate change and pollution amongst other important factors, and if it wasn’t for the impressive work of our conservation organisations, the report would make for even more grim reading. We can all do our bit to help these animals living on our own doorstep to ensure they are not lost forever”.

Eden has produced a guide with tips on how people can help to save our native species. The guide is available at www.exploreeden.co.uk

Show Me The Funny: ITV launch search for a stand-up superstar