blinkbox were quick to come to the rescue of Ryan Gosling fans distressed by the news that Ryan Gosling is to take a break from acting.

The TV and Movie on-demand service set up helpline on Friday which has been mobbed with calls over the weekend. 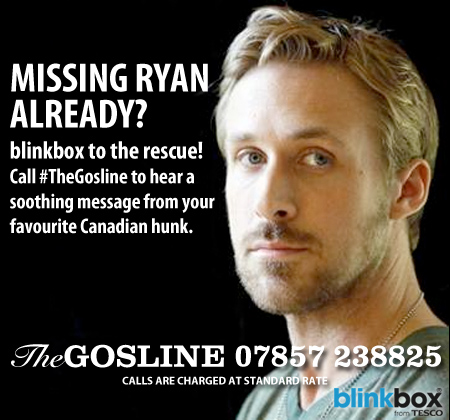 The company tweeted: “To help console Ryan Gosling fans upset by the news he is taking a break from acting we’ve set up #TheGosline.”

The number rings through to a voicemail which plays a recording of the actor’s voice.

‘The Gosline’ received hundreds of calls over the weekend from admirers who were treated to the star’s quote from his film The Notebook: “So it’s not gonna be easy. It’s gonna be really hard. We’re gonna have to work at this every day, but I want to do that because I want you. I want all of you, forever, you and me, every day.”

A blinkbox spokesperson commented “we couldn’t bear the thought of the distress caused by Ryan’s announcement. We hope that this goes some way to relieving the pain and hurt caused by his decision to take a break.”

Fan gets surprise visit from Rihanna at River Island launch