Maggie Alderin-Pocock, who is one of the first credible scientists to claim that aliens probably do exist, worked with an artist to reveal her own vision of what aliens could look like – and according to her they are most certainly not little green men with glowing fingers. 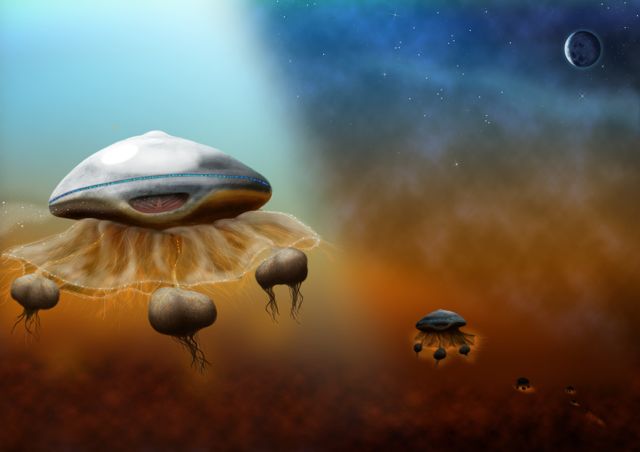 Her picture of an alien and accompanying essay was commissioned to celebrate the launch of TV Channel Eden’s Science Month this July, and forms part of a free e-book which is available from Amazon and iTunes from 20th July.  The picture shows a creature with a large surface area, hanging onion-like sacks and a flowing canopy skirt.

Aderin-Pocock, who says her theory is based on the latest scientific discoveries on how life began here on earth, suggests our inter-galactic cousins would be large, jelly fish-type creatures with metallic surfaces and orange bottoms. They would ‘scope chemicals from the atmosphere’ through a large opening, like a manta ray, and, if they are intelligent life forms, ‘use pulses of light scintillating up and down their spines’ to communicate. 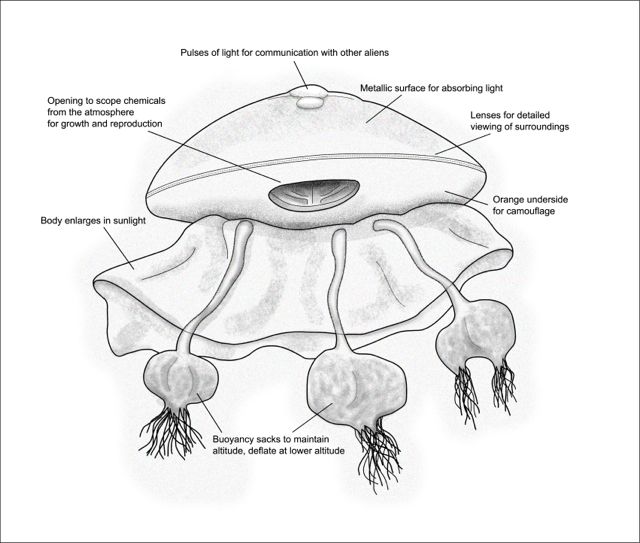 Aderin-Pocock, the lead scientist for optical instrumentation group Astrium, currently working on the observation instruments for the Aeolus satellite, also reveals her belief that as many as four intelligent alien civilisations may exist in our galaxy. But because the galaxy is so huge, she doubts whether humans will ever be able to contact them.

‘Some have suggested that hydrothermal vents, which bring very hot, mineral-rich water gushing through the ocean floor, could have provided the spark that triggered the creation of early life,’ she explains.

‘Japanese scientists recently simulated the conditions inside a thermal vent and were able to generate an electric current. They think this could have helped convert carbon dioxide into complex organic molecules that formed the chemical precursors of life. The more we find out about the conditions in which life can occur, the more precise our calculation of the likelihood of extra-terrestrial life becomes.’

This has led Aderin-Pocock to speculate that aliens may have evolved in other planets in environments very different to our own. She wonders if liquid methane, as found on Saturn’s moon Titan, might be one such medium for ‘life, Jim, but not as we know it’.

‘Our imaginations are naturally constrained by what we see around us, and the conventional wisdom has been that life needs water and is carbon-based,’ Aderin-Pocock writes. ‘But some researchers are doing exciting work, playing with ideas such as silicon-based life forms. Silicon is just below carbon in the periodic table, has some chemical similarities and is widely available in the universe. So perhaps we could imagine similar instructions to DNA but with silicon. Maybe life doesn’t have to resemble anything like DNA at all.’

The real question about alien life for Aderin-Pocock is not ‘are they out there?’ but ‘will we ever meet them?’

‘The Hubble Space Telescope revealed that there at least 100 billion galaxies, each of which is made up of billions of stars. That adds up to a lot of planets,’ she points out.

‘The Voyager 1 spacecraft, which is carrying a recording of greetings from Earth in different languages, has been travelling through the solar system since the 1970s and has only just made it into deep space. To get to our nearest neighbouring star, Proxima Centauri, would take it 76,000 years.’

However, she thinks that it is unlikely that aliens would be able to survive in the Earth’s environment.  ‘The sort of planet this creature live in (hydrogen and methane rich) would find the damp oxygenated atmosphere of Earth probably quite corrosive’ she says.